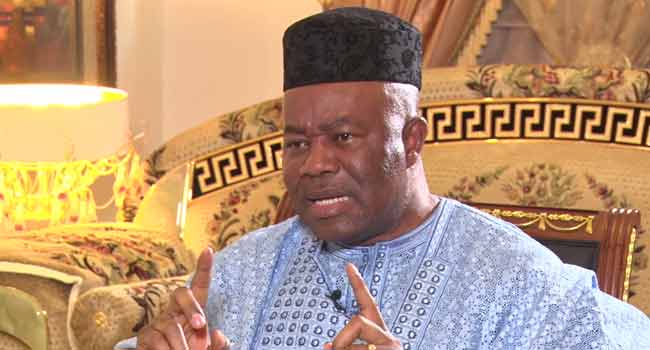 The Court of Appeal Abuja Division, on Wednesday, granted leave to Senator Godswill Akpabio as an interested party to appeal the judgment of the Court which ordered the Independent National Electoral Commission (INEC) to delete his name as the duly elected candidate of the All Progressives Congress (APC) for Akwa Ibom North West Senatorial District and replace him with DIG Udom Ekpoudom rtd.

It would be recalled that the Court on Monday, November 14, 2022, in the Appeal brought by Ekpoudom against the APC and INEC had held that Ekpoudom was the candidate of the APC for Ikot Ekpene Senatorial District in the 2023 elections.

Akpabio’s Counsels Umeh Kalu SAN and Berth Igwilo SAN had applied for Leave for Akpabio to be joined in the Appeal because he was not a party in the proceedings, to enable him to approach the Supreme Court for reprieve.

Ruling on the Motion for Leave after hearing Mr. Umeh Kalu SAN, Berth Igwilo SAN, the three-man Panel of the Justices of the Court of Appeal, led by Hon. Justice U.A.Ogakwu unanimously granted Akpabio’s prayers and held that it was satisfied that the Applicant had deposed to cogent issues in his affidavit and further affidavits to warrant the grant of Leave to appeal the judgment of the Court of Appeal.

The Court further held that since Senator Godswill Akpabio’s name had earlier been forwarded to INEC as the Candidate of the APC, it was imperative to allow him to appeal the judgment of the Court delivered in his absence.

Commenting on the ruling, Umeh Kalu, SAN commended the Justices for their sound reasoning in the judgment saying, “you cannot shave a person’s head in his absence.”

By this ruling, Akpabio is expected to approach the Supreme Court before the end of the week.