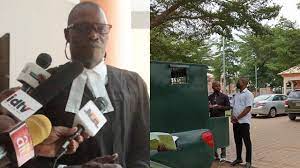 An Abuja High Court on Thursday ordered that a teacher, Igoche Daniel Adah be remended in Kuje Prison Abuja, pending the ruling on his bail application.

The Presiding Judge, Justice Akeem Fashola ordered that the accused, who had already been dismissed, be remanded in prison till July 12 as the ruling on his bail request will be considered.

Mr. Adah, was put on trial by the FCT  Commissioner of Police, slammed with a one count charge to the effect that on April 15, 2021, he repeatedly touched the breast of a 14-year old pupil of Destiny Academy, Lugbe, Abuja, (Name withheld) who was placed in his care.

The defendant however pleaded not guilty to the charge punishable under section 32 of Child Rights Act.

The Defense Counsel, Emmanuel Agwuamu tried to secure bail for him but the volume of e obits against him before the court was so much.

The Police Counsel, Mr. John Ijagbemi opposed the bail application, stating that the defendant has on two separate occasions, refused to appear before the court to take his plea without a Justifiable reason.

He added that the police had issue a bench warrant before he could be apprehended and brought to court.

Mr. Ijagbemi alleged that he abused the administrative bail granted him by the Commissioner of Police, as he refused to Honour the invitations by the police after he was allowed to go home and prepare his defense.

He prayed the court not to grant the defendant bail, alleging that the defendant committed a similar offense and that it will be risky letting him off on bail, adding that his evasive nature has made his surety to withdraw standing for him.

Justice Fashola after taking arguments from both parties said that all exhibits before the court has to be examined before he delivers his ruling for or against the application. He fixed July 12 to deliver his ruling

The Judge ordered officials of Kuje Correctional Centre, who were in court, to keep him in prison custody till the July 12 date.

The dismissed teacher who was accompanied to the court by his wife was taken away in a pensive mood.

Adah, who was a teacher in an Abuja-based school, was alleged to have sexually molested the pupil in 2021.

He was made to face a panel that indicted him in the allegations and was dismissed by the authorities of the school.