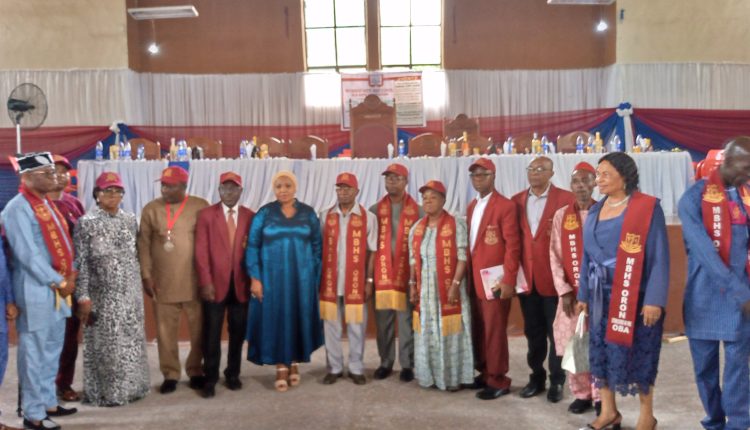 In a bid to make Methodist Boys’ High school, Oron a model for academic excellence, Akwa Ibom state government has concluded arrangement with the main stakeholders to take over the management of the school.
The taking over of the school which was facilitated by Prof. Ibia E. Ibia led national executive of the old boys association in agreement with the BOTs and other relevant stakeholders formed parts of the activities that marked the 117th anniversary celebration of the school which commenced with a carnival float on the first day in Oron.
Activities on the second day (Saturday) held at the school chapel included award presentation to eminent personalities including His Excellency governor Udom Emmanuel and commissioner for education, Mrs Idongesit Etiebet witnessed by a sizeable number of old boys, both in trousers and skirts.
Honoured alongside the governor and commissioner for education were  the Prelate Of Methodist church Nigeria, His Eminence Dr. Samuel Kalu Uche, the prelate emeritus, Sunday K. Mbang, Sir Amb. Etim Udo Uye, Sir Dr Edet Amana, Sir Sunday Udo Akpan and Elder Effiong Bassey Offiong.

Presenting the award to Governor Udom Emmanuel through his representative  the commissioner for education, Mrs. Idongesit Etiebet, the national president of Methodist Boys’ High school old boys association (MBHSOBA), Prof. Ibia E. Ibia thanked Governor Udom Emmanuel for his wish to make the school a model as the oldest in the state and second in entire South East and South South geo
Political zones.
Also presenting an award to Mrs Etiebet herself, Prof Ibia called on the commissioner and the executive chair person of State Secondary Education Board, Dr Ekaette Ebong herself an old boy in skirt, to help expedite action on the employment and absorption of more science based teachers including those on the additional list he presented to the SSEB chairman, adding that over five hundred students would be admitted into the school this session.
He attributed the low turn out of old boys to the day 2 event to program of visit of the outgoing Prelate, Methodist church Nigeria, Dr. Samuel Uche to Oron diocese and the fact that old boys from branches didn’t expect home coming to hold this year.
“Methodist Boys’ High school has produced great men and women. The bulk of them are Methodist by faith and some of them are attending the visitation program of the prelate which is ongoing. Infact, the prelate had been in Oron since two days ago.
“Another reason is that home coming of old boys of  the school usually holds every two years but I felt governor Udom Emmanuel deserves to be honored for facilitating the take over, because he is going early next year.  That’s the reason the national exco called for the event this year.   It should not be monkey dey work baboon dey chop. This arrangement has taken most of the branches off guard, hence their inability to attend today’s event”, he said.
Prof Ibia apparently happy for the successful take over of the dilapidated school from the Methodist church, high lighted the problems confronting his executive to include the two bad toilets which he has rehabilitate for use by a few boarders coming into the dormitories, indiscriminate felling of trees planted in the ravine to check erosion and encroachment of the junior field by illegal developers.
Reacting to the honor done him, the governor promised to direct inter ministerial committee to assess the extent of dilapidation in the school with a view to starting renovation work immediately, adding that the idea behind the take over is to make the school better.
On her part the Governor’s representative promised to ensure that teachers who can deliver on their mandate are posted to the school, even as she advised the ongoing students to follow foot steps of the old boys to make sure that Methodist Boys’ High school regains its lost glory as one of the greatest citadel of learning in Nigeria.