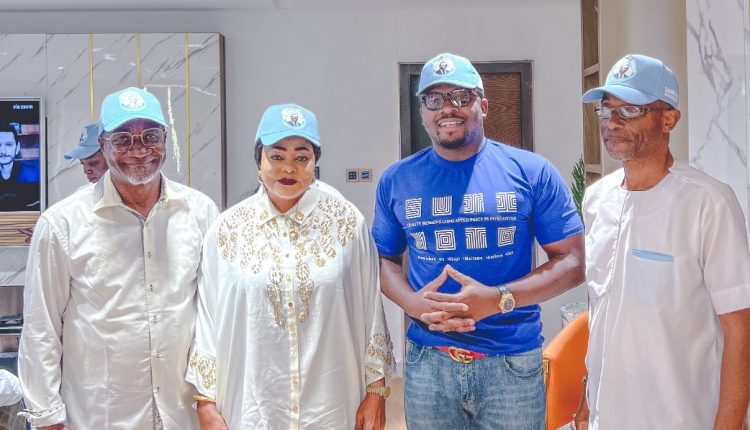 The Sanwo Olu Support Group under the inspired leadership of the DG, Hajiya Tai Elemosho visited Sujimoto Group Headquarters today to galvanize support for His Excellency, the Executive Governor of Lagos State, Governor Babajide Sanwo-olu’s second term as a result of the great work he has done in Lagos state within the last 4 years and to induct me as a Sanwo-olu Ambassador.

During Hajiya’s speech, she stated categorically that their intention is not to force coerce people into supporting the incumbent but rather for people to vote their conscience after a careful consideration of the glossary of achievements of the Sanwo olu’s government, within the last few years.

Someone once made a speech and said, ‘if not for Lagos, where will Sujimoto be?” We may all be in denial but Lagos state has sustained lots of entrepreneurs and businesses, giving us the opportunity to thrive irrespective of the common issues we face. Lagos is a product of the extreme efforts and great visions of exceptional leaders and politicians, working tirelessly for the good of the state. Despite the global challenges, we have seen Governor Sanwo olu rehabilitates 632 inner roads, 361 sectional roads, 1.4km flyover and dual carriage road delivered, 34 roads delivered at Ikoyi, Victoria Island, Kosofe and Shomolu and many other infrastructural developments in the health and educational sector. My property experienced a 120%increase in valuation as a result of the infrastructural development in the Ikoyi corridor.

Leadership for me is not in titles and appendages, rather it is about being hands-on and taking responsibility, which is reflective of the government of Sanwo-olu, irrespective of of any shortcomings. My only concern is that his many achievements are not being applauded and amplified in the media as it should be, therefore the citizenry are not aware of these laudable accomplishments.

I saw Governor Sanwo-Olu speaking yesterday as a guest on Channels Television, and you can see a very active and hands-on leader, who not only understand the task but is also fully involved in the complex process of regulating Okadas on our highways, to creating a 10km bypass road from Chevron to Freedom road; displaying exceptional understanding of LAWMA’s inner-workings and the debt structure mechanism of Lagos state. Speaking on government’s activities on the Apapa road, I was blown away by his ability to recall the number of trailers plying the Apapa axis and what government is doing specifically to free up the commercial area. These and many more are a testament to the fact that Governor Sanwo-olu is not just a man of words, he walks the talks with verifiable proof, and is the right CEO to continue the Lagos state project.

For me, the type of CEO I will hire is a CEO that has a track record of “I have done it before” not “I will do it”.

Security for Sanwo-olu is the most important part of his government because he recognizes that without a secure state, there cannot be development. Lagos economy which is larger than Ghana cannot take security for granted and that is why he reiterated that his administration is not waiting on anybody before it secures its people. According to him, “In the last three and half years, we have been supporting all the security architecture in the state. He also reiterated that the Lagos state government has just received over 21 containers filled with security and IT infrastructure, to bring 21st century security and camera monitoring system to every part of the state.

My support for Sanwo-Olu is not based on any personal benefit or aggrandizement as I have never taken a contract from Lagos state, neither have I built a kitchen from any political contract; however, my support for Governor Sanwo-olu is based on the actualization of the collective objective of the Lagos project, which if achieved, will benefits individuals and businesses in the city of Excellence.

I will leave you with this thought provoking question asked by the Governor in the course of his Channels TV interview. According to him, “if you have an emergency at 2:00am, who will you call? The man with experience or the man that promised you experience?

Ponder on this. Eko Oni Baje!

Sijibomi Ogundele is the young, energetic and innovative GMD/CEO of Sujimoto Group, the No.1 Luxury Real Estate Company in Nigeria and the Developer of GiulianoBySujimoto which is home to Nigerian-American singer, Davido; LucreziaBySujimoto which is set to be the most sophisticated high-rise in Africa, a 14-storey tower with incredible premium features and facilities; the LeonardoBySujimoto waterfront development – a 25 storey luxury tower with exceptional amenities; the QueenAminaBySujimoto, a first-of-its-kind luxury tower located in highbrow Abuja; and the developer of the proposed Sujimoto Tower in Downtown Dubai.

Nigeria To Use Global Tourism Confab To Showcase Tourism,…