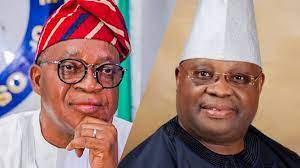 The petition filed by Osun State Governor, Adegboyega Oyetola and the All Progressives Congress (APC) challenging the victory of the Peoples Democratic Party (PDP) in the July 16 election is dead on arrival and a mere waste of time, says the Governor-elect, Ademola Adeleke.

He said the people of Osun have spoken and no amount of court cases can overturn his election as governor.

Adeleke stated these on Saturday, during the official defection of Dr. Wale Bolorunduro, a former Commissioner for Finance under the administration of Ogbeni Rauf Aregbesola from APC to PDP at Ijebu-Jesa in Oriade local government area of the state.

The Governor-elect hinted that his major focus is centered on moving Osun forward, promising a massive impact in his first 100 days in office.

He said, “the whole world knew that the election was free and fair. APC are just wasting there time. They have the right to go to court but I can tell you, it is dead on arrival.

“Osun people who have voted massively for us should keep calm and worry not. This time around, the people of Osun have spoken and it is the will of God.

“The only thing I’m concerned with now is how to make Osun great and I’m promising that in my first 100 days in office, Osun State will witness a massive change.”

Speaking on why he defected, Bolorunduro said he left APC because the party is full of deceit and lack ethos of Obafemi Awolowo.

“I and my followers are decamping today to PDP because it is the party for the progressive. It is a party that is transparent and not deceitful as the former party I was.

“I left APC because my glory was being covered and my contributions trampled upon. APC is full of deceit. There is nothing called progressivism in that party.

“The party lacks fairness, justice, transparency and the ethos of our avatar, Obafemi Awolowo. I had no choice than to leave APC and come to the party of light,” Bolorunduro said.

However, The decision of the Osun State Governor, Adegboyega Oyetola to challenge the outcome of the July 16 gubernatorial poll in the state at the Election Tribunal has been described as a good and welcome development.

The Fruit Sellers Association of Nigeria, Osun Chapter, on Sunday during an engagement meeting at the State’s Civic Engagement Centre, Osogbo pledged their support for Oyetola to reclaim his mandate.

The Chairman of the association, Alhaji Adbulateef Famakinwa stated that the people of the state would not allow the outcome of the governorship election to demoralise them, but would rather continue to support the governor in their prayers.

Famakinwa said the association is confident that the outcome of the tribunal would be favourable to Oyetola.

He said various developmental projects the governor had executed in the state would not be forgotten, adding that the association was solidly behind Oyetola to reclaim his mandate at the tribunal.

He said the governor should be rest assured that members of the group are not ingrates and would not abandon him at this critical stage.

“We will not stop praying for the governor to come out victorious at the tribunal.

“We are with him and we will support him with everything we have for him to succeed,” he said.

In his response, the governor thanked members of the group for their support and solidarity.

Represented by his Special Adviser on Civic Engagement, Mr Olatunbosun Oyintiloye, Oyetola said he was confident of victory at the tribunal.

He also commended the people of the state for their unflinching and unwavering support, adding that the will of God will eventually prevail.

Oyetola said the grounds for which he was challenging the election at the tribunal were valid and expressed optimism that justice would be done.