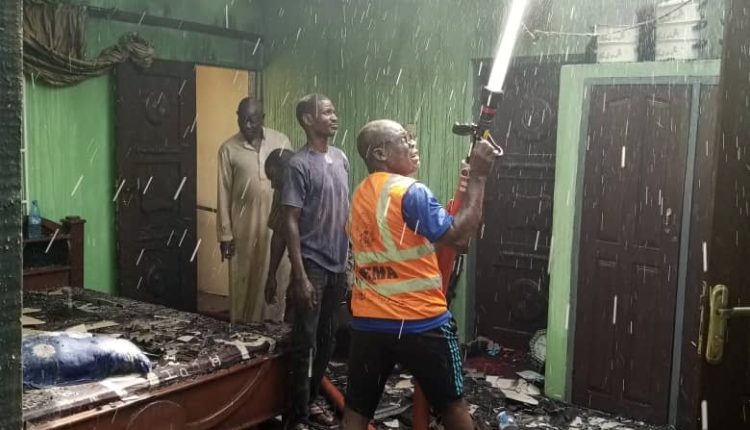 .  as fire razes apartment in Ibadan.

By Patience Ogbo
The National Emergency Management Agency NEMA has urged residents in Ibadan to install  smoke detectors and fire extinguishers in their homes, offices and shops  as a way of checking the spread of fire  in the state.
NEMA South West Coordinator, Mr. Saheed Akiode stated this on Sunday when the Agency visited a scene of fire at the Alafia Estate Orogun,in  Ibadan Oyo State.
According to residents, the fire which engulfed the upper rooms of the one storey apartment was said to have been caused by a high voltage   surge from  one of the locked  rooms upstairs.
The owner of the building , a septuagenarian and his family were having breakfast when the incident occurred it was learnt.
Following the fire incident which started in the morning , a resident placed a distress call to the NEMA office  and subsequently, the Agency’s Coordinator in South West, Mr. Akiode activated  the federal and state fire services and they all raced to the burning house to put off  the fire while the police were on ground to control the crowd and  stop miscreants from taking undue advantage of the situation.
The combined efforts of all the agencies stopped the fire from spreading from the upstairs to other rooms downstairs and to nearby apartments
Advising residents to take pro active measure  in checking fire incidences, Mr. Akiode said ” Some weeks ago, we held  a road show in Ibadan and in Bodija market where we educated residents of the need to stop fire incidences by being proactive. This is dry season and  we are advising that they should be proactive by installing smoke detectors, fire extinguishers in their homes, offices and shops. The smoke detectors will alert the occupants that there is a fire and the fire can be quickly checkmated before it spreads and destroys   valuable property  to lost of lives. “.
Continue Reading
fire extinguishers in their homesNEMA advises residents to install smoke detectorofficesshops
0 39
Share FacebookTwitterWhatsAppPinterestEmailFacebook MessengerLinkedinTelegram

Emirates lands in Nigeria in style