The foremost engineering construction company, Julius Berger Nigeria Plc, has assured the Federal Government of the quality of work to be done on the Phase 1 section of the Federal Secretariat, Abuja.

Managing Director of the company, Engr. Dr. Lars Richter who was represented at the flag-off of rehabilitation works on the first Phase of the secretariat by Regional Manager for Abuja Operations, Engr. Oliver Berger in a short speech said the Federal Secretariat was first built by Julius Berger decades ago and has stood the test of time. “It might interest you to know that this building, the Federal Secretariat Complex, Phase 1, for which we have been awarded a contract to rehabilitate, is one of our company’s proud legacies”, he said, adding that, “our company’s relationship with the Federal Secretariat Complex dates back over three decades. Oliver Berger recalled that “On January 22, 1990, Julius Berger was given the contract to build the Federal Secretariat, and we are proud to say that the building’s structure is still strong to this day, making it a point of reference for quality construction.”

He further said the rehabilitation work will bring the building back to its former glory “and infuse it with an impressive touch of modernity”. The main work, he continued, “is fixing up the wet areas, which include tearing down and replacing all the plumbing components, tiles, partitioning walls, ceilings, and all the pipes and cables for the mechanical and electrical systems”. Other aspects of the rehabilitation work to be effected by Julius Berger include repairing the roof by replacing the old felting that has reached the end of its life span; installing a new booster station with pumps to serve the entire building, rehabilitation works on the lighting, aluminum vents, natural stone flooring, glass panels, and painting. “The building’s two lifts will be replaced with new ones, while the emergency staircases will be upgraded for an easier and safer exit. The 10th and 11th floors which were damaged by fire a while ago will now undergo renovations”, Oliver Berger said.

On fears of disruptions to the daily work of Government in the Federal Secretariat, he said, “…as it is our usual tradition at Julius Berger, working seamlessly on an operating site, we have come up with a plan to fix up this building without getting in the way of the officials who work there. Along with doing our work in phases and weekends, one notable intervention is giving the client portable toilets to use while the wet areas are being fixed”. He assured that the company will in conjunction with the users of the building ensure that all works are carried out successfully, while still providing comfort to the civil servants at work.

The Minister of the FCT, Malam Muhammad Musa Bello, who flagged off the rehabilitation on Tuesday at the complex, described the exercise as a milestone in the efforts of the FCTA to rehabilitate public buildings and infrastructure in the Nation’s capital. He said that the secretariat complex, like many other public buildings in the FCT, was constructed 30 years ago and hence requires rehabilitation adding that the exercise came as a result of several discussions with the Head of the Civil Service, Dr. Mrs. Folashade Esan, who was passionate about providing a conducive working environment for civil servants.

Speaking on funding, the Honourable Minister said the budgetary provisions were a constraint and called for serious efforts to ensure adequate funding. He also frowned at the level of abuse on public buildings in the FCT and called for reforms in the existing procurement system for the maintenance of public facilities.

Meanwhile, the Head of the Civil Service of the Federation, Dr. Yemi Folashade Esan, commended the FCTA for working to ensure that the environment where civil servants spend most of their time was conducive, noting that the rehabilitation would come with increased productivity. She added, “I am glad that the FCT with the FCDA, alongside Julius Berger, is working to make sure that the environment is very conducive for civil servants. I am also looking forward to the end of this rehabilitation”.

Speaking at the event, the Executive Secretary of, the Federal Capital Development Authority (FCDA), Engr. Shehu Hadi Ahmad explained that the Federal Executive Council, after due process, graciously approved the award of Phase 1 of the contract to Messrs. Julius Berger Nigeria Plc with a completion period of 24 months. He added that the rehabilitation work would be carried out in phases to ensure that government activities are not paralyzed as the works are being executed. 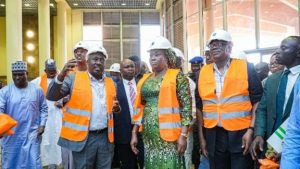