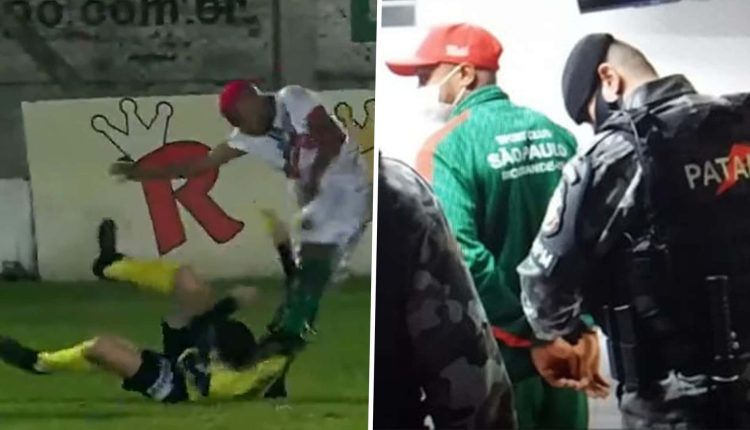 A Brazilian footballer has been banned from the sport for two years after he attacked a referee and kicked him in the head during a match earlier this month.

William Ribeiro has had his contract terminated by Sport Club Sao Paulo following the incident where he hospitalised official Rodrigo Crivellaro in an altercation following a yellow card.

Now, he has been further suspended from playing the game at a professional level until 2023 at the earliest, potentially ending the 30-year-old’s career.

During a game with Guarani-RS, Ribeiro was shown a yellow card for a bad foul by referee Crivellaro, sparking the attack.

The player initially punched the match official to the ground, before kicking him in the head, after which he was subsequently forced away by players on both sides.

Medical teams attended to the scene and Crivellaro was later transferred to hospital for further treatment following the attack.

Please note the below video contains scenes which some readers may find upsetting.

Ribeiro was contrite following the decision to ban him handed down by the First Disciplinary Commission of the TJD-RS (Rio Grande do Sul Court of Sports Justice).

He said: “There were several issues on the field. I made a mistake. What I did was not right. I’m very sorry. At the time I had a blackout and I acted like that. I can’t explain what happened to me at the time. It just darkened my eyes. I’m even looking for psychological treatment.”

Koeman responds to reports of Dani Alves returning to Barcelona