Archbishop Designated Isaac Idahosa is elated at his just concluded 32 years on pulpit. During an interview with one of the corresponded in Champion Newspaper, Clement Emmanuel to ArchBishop Designated Isaac Idahosa, he said “it is the journey of His Grace. His Grace has helped the journey to be easy and am soaring in His Grace and Mercies, not without ups and down but God has always shown up the times i need Him to show up in my affairs. Journey so far, God has been so good to me, my family and my ministry”.

56 years old Isaac Idahosa added that Ministry is not without challenges, saying that there were days he felt weak, and like quitting back in the days but not anymore. Ministry is not a bed of roses, that is why it is essential that you are called into ministry, and having a personal encounter before going into ministry. When you have an encounter, it produces an experience. Your calling must be clearly defined in the place of encounter.

Also, on the minister’s rollcall for the Evening of Thanksgiving was Archbishop John Osa-Oni Deputy National President (South West) of the Pentecostal Fellowship of Nigeria, PFN. Among others.

God First Ministries started in Minna, Niger state in August 1985. In this excerpt, the cleric, Archbishop Isaac Idahosa, the General Overseer of the ministry talks about his humble beginning.

While in Minna, i had no money to start the ministry nor did I have anybody to run to. The only money I had on me then, was 50k. And the Lord told me, he wanted to establish my ministry with 50k .

I remembered approaching one of our family friends then called Idowu Maya. I shared my vision with him and he offered to give me his boys- quarters to begin my ministy. I was there with my guitar and I was playing this guitar everyday to the point where I started attracting the attention of neighbours and students in that area. After a while, the boys-quarters could no longer contain the congregation and the Maya’s family decided to give me their living room. But despite the gesture, our population was increasing by the day.

At that point, I told Mr Idowu Maya that I was going to rent a two-bedroom apartment. He thought I had enough money to pay for the accommodation, not knowing that I had nothing on me. Eventually, we found one, and I was required to pay the sum of N6,000. Remember, I had only 50k ,so I left to look for how to raise the money.

On my way, I saw an abandoned building with an inscription on the wall “Gods own house.” Immediately, the Lord told me this is where I want you to start your ministry. I hesitated a bit but God said to me clearly, when people misunderstand you, don’t try to misunderstand yourself and when they laugh at you, don’t laugh at yourself. I said to Him, but I’m left with only 50k and he replied ‘whom I called I will equip.” Thereafter, I narrated my experience to the Maya’s family and they laughed at me. Yet I was left with no choice than to obey the Lord’s command .While I was trying to contact the owner of the property, I discovered that it was owned by one Barrister Shadare who died mysteriously in connection with a case he handled in court. He ran mad and thereafter died mysteriously.

I learnt equally that the next person that occupied that house also died in the same manner. As a result, when I indicated my interest in moving into the apartment, the people were full of apprehension. Moreover, I was not in doubt of the words of God because my name Idahosa implies hearing from God.

I was directed to see the then former Chief Justice of Niger State who was in charge of the property. I met him, and he obliged me the request to move into the building free of charge. Immediately, I gathered my student-members and neighbours who helped me to clear the area. I moved into the building with a single-spring-bed given to me by Mr Maya in 1989. While living in that apartment, I used to go to the farmland to take my bath as well as ease myself. You may want to ask, were there nobody to come to my rescue? The Lord said to me, if anybody should come to my rescue, he or she would lay claim to my success in future. And that’s why He was making me pass through a process where people would laugh at the process, but would not laugh at the end product.

But He warned me that I should not allow what I was passing through today to undermine my journey to greatness. According to Him, I may have started off, on a small note, but small beginnings do not signify small destines.

Armed with these words of encouragement, I assembled my student-members on the 25th of August, 1989 and publicly preached to them. I preach faster today because of the way I started. Then, I had no money to procure a microphone or a speaker. I used to preach, using a microphone that was connected to a stereo-cassette.

Soon, my ministry started flourishing, and before I knew what was happening, I was everywhere. The first time I got an invitation to come and preach in Republic of Benin, it was like an open door for me. I came all the way from Minna to Lagos, with the intention of boarding a flight to Cotonou. Unfortunately, I didn’t know I could travel to Cotonou by road. A tithe of N7,000,00, which was paid by one of my members then, who is now a pastor in one of the churches in Minna, actually helped in setting up my ministry. Even though, God later told me that the money was not meant for me. Also, during that period, I was invited to come and preach in Zaria where many souls were saved.

After some years, God directed me to move to the South-West. That’s how I came to establish my church in Lagos. I first established my church in Surulere, before I later moved on to Ajah area of Lagos. I remember the first overseas country I travelled to, as a minster of God was Jamaica, courtesy of one of the daughters. But today, I have travelled far and wide places, spreading the gospel of salvation. In God’s words, he gave me anointing, grace and favour, but he warned me to beware of love of money, opposite sex and pride. According to him, these three things can destroy a man any day. It has been my watchwords, and I thank God for His mercies and grace upon my life.

I didn’t know while I was growing up that I would be a servant of God. Even when I was in the Bible College, I was running away from serving God. But when the call came to me, it was obvious, I didn’t struggle with it. Sometimes, people fail to understand that being a man of God does not remove the human aspect of that person. My father used to say to us, “you can control nature but you can’t cheat nature.” If I decide to go to the beach today with my family, people will raise eyebrow. They forget that I’m also a human being like them. There was a time I visited one of the fast foods in Ikeja, with my family. Instead of enjoying myself there, I ended up praying for people who gathered round me. Serving God comes with a lot of challenges and denials. Married to Christy Idahosa with two lovely children, Christabel and Osagie Idahosa.

Appreciation is an application for more. God has never taken me this far to leave me. 32 years of God’s Faithfulness, He has done what no man can do. Today, my ministy is flourishing not because of what I can do but because of what He almighty can do and still doing. I have traveled to more than 60 countries of the world propagating the gospel of Christ. The ministy that started in Minna has given birth to many branches across the globe.

Everyday is a plus. 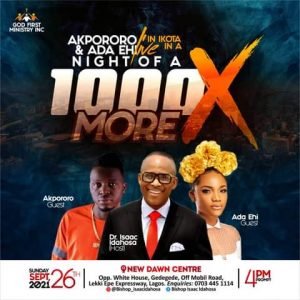 All is set for an Annual Program” Night Of A 1000 Times More with two Giant Guests, Akpororo and Ada Ehi, among others.

Bring up your children in the way of God, Ahmadiyya women advise parents

A Christian organisation and Church, we have been Building Lives Spiritually ,…

Accolades to major 1 Ugochukwu as he recently host biggest…

Bring up your children in the way of God, Ahmadiyya women…

A Christian organisation and Church, we have been Building…