Supreme Court ruling: Babayemi prays for Adeleke, says he has no regrets 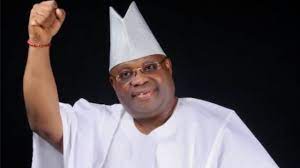 Blessing Akorowosi, Osogbo
The factional candidate of the Peoples Democratic Party (PDP) ahead of the July 16, 2022 Osun State governorship election, Prince Dotun Babayemi has congratulated the State’s Governor-elect, Ademola Adeleke over his victory at the Supreme Court.

Babayemi had filed a case against Adeleke challenging his candidature as the flagbearer of PDP which was dismissed based on technical grounds in the suit.
In a statement on Friday, personally signed, he averred that he has no regrets as the exploration of the legal process was good for the country’s democracy.
“I want to wish the Governor-elect, Senator Ademola Adeleke, the PDP and the good people of Osun the very best as a new administration under the PDP prepares to berth in Osun. I pray it will bring about the long awaited turn around to the state and its people,” he prayed.
Babayemi noted that Osun was a common heritage of all concerned which should be cherished and the efforts at taking the state to the next level should be a task for all.
On the Supreme Court ruling, he said “the legal journey was a long walk and worthwhile with no iota of regret. The kernel of our case at the Supreme Court was not reviewed as it was decided on technical grounds. Above all, no regrets.”
He appreciated his legal team, especially Barrister Edmund Biromoini, for the efforts and time invested into the litigation process while it lasted.
Prince Babayemi also thanked leaders of the party, his supporters, party members and the people of the state for standing solidly behind him throughout the struggle.
“From the depth of my heart, I want to thank everyone for their wonderful support in various forms. I’m indeed very grateful. I want to plead that we ensure that nothing breaks our resolve at making sure that Osun never lags behind developmentally,” he said.
He called on PDP members and the people of the state to continue to support things that would aid the growth of the state, urging them to be law-abiding.