Nigeria with the 1-0 win over Cameroon, have now secured their semi-final ticket in 2022 WAFCON as well as the 2023 World Cup spot 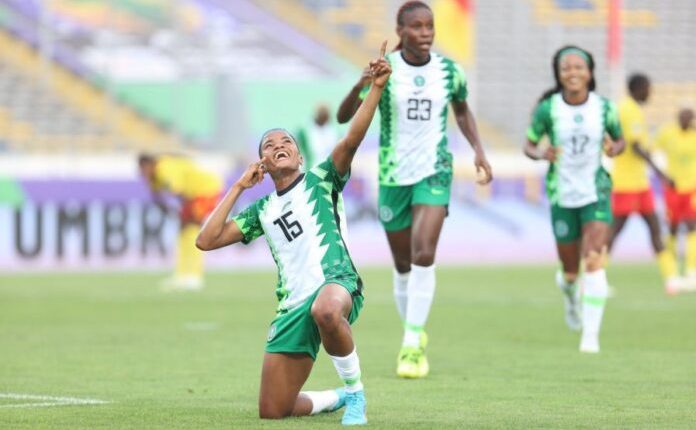 Super Falcons qualified for the semi-finals of the 2022 Women’s African Cup of Nations (WAFCON) in Morocco after narrowly edging past Cameroon in a last-8 match played on Thursday evening.

However, the half ended in a stalemate as the Super Falcons were unable to take advantage of their dominance, the only shot on target in the first 45 mins belonged to Cameroons.

Rasheedat Ajibade opened the scoring for Nigeria in the 56th minute after she headed in a beautiful cross from the right to make it 1-0.

The Indomitable Lionesses of Cameroon upped their game after going a goal down but they were unable to score against the resolute Super Falcons defence marshalled by Ebi.

With the win, Nigeria booked their semi-finals ticket in the competition and have now joined Morocco and Zambia as one of the 4 African representatives at the 2023 Women’s World Cup to be co-hosted by Australia and New Zealand.

They will meet the tournament hosts, Morocco, in one of the two semi-final matches on Monday, July 18 in Rabat.

Morocco defeated Botswana 2-1 on Wednesday to advance to the WAFCON last-four for the first time ever.