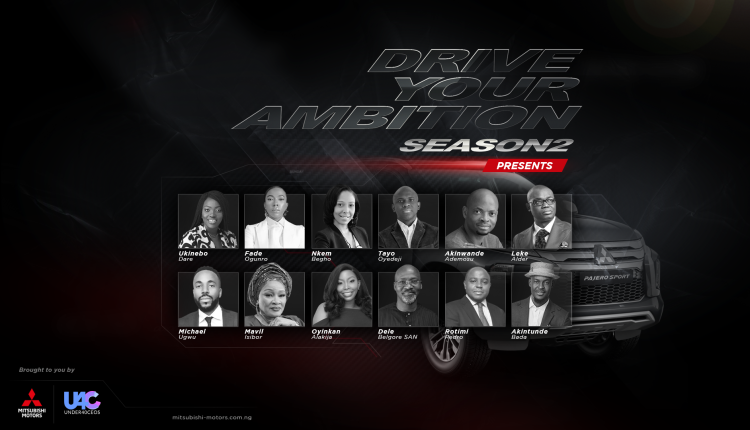 Under 40 CEOs, a platform with a mission to inspire and motivate millions of would-be young business leaders across Africa, in collaboration with Massilia Motors, the sole distributor of Mitsubishi Motors in Nigeria, is set to launch the second edition of the Mitsubishi Drive Your Ambition show starting on Wednesday, September 14, 2022.

The first phase of this edition will feature six episodes on YouTube in which six members of the Under 40 CEOS network drive experienced leaders across a wide range of industries, obtaining invaluable insights on topics related to reshaping the social, economic, and political landscape for a better tomorrow.

This edition also introduces the “Meet Your Mentor” Competition, in which six fortunate winners who are aspiring or experienced business owners can take advantage of a complimentary mentoring session with a member of the Under40 CEOs network and receive a financial contribution from Massilia Motors of 200,000 naira each.

In response to the second edition of the Drive Your Ambition campaign, Funmi Abiola, Head of Marketing and Communications at Massilia Motors, said: “Nigerian youths are indigenous and creative, and sometimes all they need is a little encouragement in the form of mentoring along with some financial support. We are excited to go further this season, from inspiring them through the stories of established leaders to creating an impact in the lives of the 6 lucky winners by supporting them financially to pursue their ambition.

“Connecting young entrepreneurs to a vast network of business leaders ensure that these young leaders gain the necessary and pragmatic experience and invaluable insights needed to perform in any role. As a continent with the fastest growing population of youths, it is high time that qualified youths are drafted into several leadership positions in presidencies and state governments, parliaments, corporate boardrooms, as well as civil society and faith-based organisations to assist in conceptualising and driving critical development initiatives, “commented Familusi A. Babajide, Executive Director, Under 40 CEOs.

Since its launch in 2015, the Under 40 CEOs network has placed a beaming spotlight on several inspiring young business leaders aged 40 and under from various African countries, including Nigeria, Ghana, Rwanda, and even South Africa.

The show has featured various transformational leaders, including Audi Maikori of Chocolate City Group; Noble Igwe of 360 Group; Bola Ray of EIB Networks and has further brought to the limelight several other inspiring leaders such as Shukri Toefy of Fort and Ade Adegoke of Oando Foundation, Abiola Adekoya of RMB Stockbrokers and a host of other prominent business leaders.