Abiodun approves N500m for development of MSMSEs in Ogun 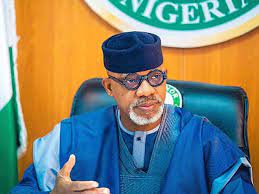 The Ogun State governor, Dapo Abiodun has approved a revolving loan facility of N500m for the development of the micro, small and medium scale enterprises in the state.

Abiodun who announced the approval during the Year 2022 International Community Day and World Trade Day Celebrations, held at the MKO International Stadium, Abeokuta, said that the scheme which will be launched before the end of the year will help the people of the state put their businesses in good shape.

While urging the eventual beneficiaries to adhere strictly to the terms and agreement of the facility so that others can enjoy the facility, said that his administration has also approved an increase in grant-in-aid ranging from N500,000 to N5m.

He explained that under the new grant-in-aid approved by his administration,  the least any Community Development Association will go home with is N500,000.

The governor added that his administration has approved a sum of N5m as ceiling for any project considered grant aided.

“For our trade and artisan groups, I have directed that a revolving loan facility of five hundred million naira be instituted to cater for the much needed micro, small and medium scale enterprises financial support.

“I have also approved the increase of what we call grant-in-aid of sums ranging from five hundred thousand Naira to five million naira to fast-track this partnership that has been affirmed to be working.

” Under this new grant-in-aid, the least any community development association so selected will go with today is five hundred thousand naira and this is unprecedented.

“Similarly, I have also approved up to five million naira as ceiling for any project considered really outstanding and grant aided, this are our contributions to support the effort of the communities,” he said.

The state helmsman while urging members of the community development associations to make good use of all infrastructure within their environments, said that his administration will not relent in its effort to be fair, just and equitable.

He further called on members of the community development associations not to allow themselves to be used by unscrupulous politicians, urging them to exercise their franchise accordingly.

The governor, while describing the community development associations as “idea incubation factories”, opined that they have continued to identify the immediate needs of their communities and also initiated and executed self help projects which are poverty alleviating projects.

Abiodun while commending the CDAs and the CDCs  in the state for spending the sum of four billion, four hundred and twenty-four million, five hundred and fourty-two thousand, nine hundred and seventy naira(4,542,970 on eight hundred and ninety three(893)community self help project, said they are indeed partners in building the future of the state together.

He added that subventions and administrative grants would also be given to 411Area CDCs, 20 zonal CDCs, 3 senatorial CDCs and state council caretaker committee.

Hunye while thanking Governor Abiodun for the release of N159m as grant-in-aids subvention and N7.5m for the celebration of the trade associations day, added that the present administration in the state would continue to empower the spirit of community development through disbursement of grants, provision of human and material resources and development of public infrastructure.

The State Chairman, Caretaker Committee of the Community Development Councils in the state, Lucien Taiwo, while commending the governor for his efforts at repositioning community development associations in the state, said that they would support the second term ambition of the governor.

Highlights of the celebration Included the decorations of the Speaker, Ogun State House of Assembly, Olakunle Oluomo as Patron and Governor Abiodun as the Grand Patron of the Community Development Council as well as the presentation of N5m cheques to some community development associations.