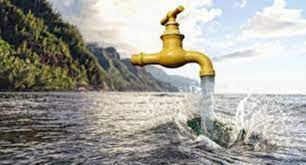 Chigozie Ikpo, Abuja
One of the most objectionable and misinterpreted provisions of the proposed Water Resources Bill is the one that has to do with the ownership and control of water resources.
The submission against the water resource bill by, Rt. Hon. Mark Gbillah, member representing Gwer/Gwer West, Benue State, is most representative of the viewpoints of antagonists of the proposed legislation.
According to him, to say that the Federal Government would be involved in monitoring and development in rivers across waterways that traverse several states, particularly littoral states, to cede lands within their territories, in any way, is to cut their nose to spite their face.
Gbillah said the re-packaged National Water Bill is yet another route to introduce the Rural Grazing Area policy (RUGA) the widely rejected human settlement policy of the Federal Government, steeped in distrust and a call to armed conflicts and a sure way to increased refugee and IDP menace in the country. “It is advisable, therefore, that the Muhammadu Buhari-led APC government should, in conjunction with advocates of this ill-conceived Water Resources Bill, withdraw it forthwith to avoid the evil wind that is likely to blow across the country by reason of its continued hearing and possible passage in the House of Representatives.”
But the Ministry of Water Resources believes this submission is amost the exact opposite of what the provides for. It insists that  the bill is rather out to strengten and enforce the ownership rights of communities on the usage and participation in the water sector .
According to the ministry, Section 1(1) of the proposed water bill which reads, “The objective of this Bill is to ensure that the nation’s interstate water resources are protected, used, developed, conserved, manage and controlled in ways which take into account amongst other factors: (a) citizens’ night of access to safe water and basic sanitation; (b) meeting the basic human needs of present and future generations;  (c) promoting equitable and affordable access to water and , reducing poverty, is for enforcement of community rights and community involvement.
Speaking during an event in Abuja July 19, 2022, Engr. Suleiman Adamu, the Minister of Water Resources, said that the bill, having generated controversies over the years, has been reviewed by many water experts and highly skilled legal professionals. Some of the innovations captured in the review includes the institutionalization of independent body to help reposition and regulate the water sector.
“The bill has  answers to some of the questions on the governance of water resources. We must not be made a laughing stock at the international level. Let common sense prevail.”
Engr. Adamu has said the proposed water bill which seeks to harmonise all the statutes in the sector was to protect the rights of Nigerians and the environment as they deploy water for domestic and commercial use.
He dismissed allegations that the 13th version of the water bill was designed to regulate or deny Nigerians the right to access and use water for whatever purposes.
According to him, the false narrative being peddled in the public domain by persons who do not have the interest of the ordinary Nigerian at heart was only to derail the good intentions of the bill designed to meet international best practices in Nigeria while they advance their selfish interest which the law conflicts with.
He wondered why a state government would not prioritise water supply to her state and people in a safer measure than risk public health through the uncoordinated sinking of boreholes that have shown many boreholes dug by septic tanks and exposing the consumers of such water to health hazards.
‘’Now that all land issues will be in accordance with the Land Use Act that means state governors will continue to exercise their powers over land.
“There is nowhere in this bill where anything is mentioned that the federal government will take responsibility for any land, not even one square inch or one square millimetre or one square micro millimetre in this bill; nothing whatsoever.
“So go out and tell the citizenry the truth about this bill. People are trying to mislead Nigeria for whatever interest and we know that some of them have been sending this false narrative since this issue started.
“And for them to maintain their credibility, in the public face, they have to continue to spew these lies to the world. And they think they can remain relevant because once the truth is out, they would have lost credibility or integrity. Others are doing it because they are taking water in commercial quantities.
“‘They are taking this water, mining water and selling it to poor people, even when they had the opportunity to improve the water services in their own locations. They don’t want to pay the necessary licensing fee. And, let me tell you: based on the delegated powers of the minister, as we’re talking today, the national integrated water management commission has even the right to seal premises. The laws are there.
“Those people because of their vested interests, personal interests, they don’t want to pay the fees while they are selling water to poor Nigerians. They don’t want to go and subject themselves to licensing and, therefore, they are attacking and trying to discredit the bill for their own personal interest.”