“RIOT IN UBAHU,” My book, will help students improve their vocabulary 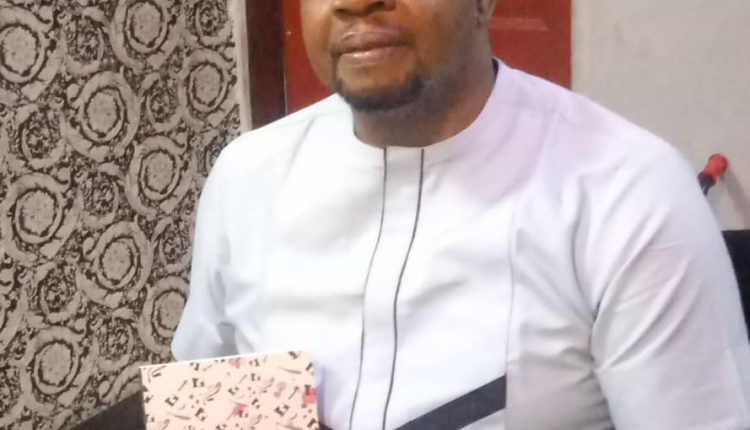 In this interview, Iroha Chimere from Abia State, who is an accomplished accountant by profession, and a creative and motivational writer, talks about his book that was recently approved by the Nigerian Educational Research and Development Council to be used as literature in schools in the country. He talks about what motivated him to write the book, “Riot in Ubahu,” and he also talks about his challenges and the need for Nigerians to cultivate a reading culture. Clement Emmanuel and other news media captured this in an exclusive interview.

HOW DID YOU START WRITING BOOKS?

My writing career as another profession started long ago, when I was younger, with the help of my father, who is an educator. He deeply introduced me to a whole lot of literature and literary research, like Wole Soyinka, Shakespeare, and Chinua Achebe. Furthermore, he did not stop there; his zeal and love for writing inspired me to push further, despite limitations, to achieve more, just as the title of one of his books suggests. I am not the kind of writer who is motivated by money but by a strong urge as well as passion. I don’t compromise when it comes to writing; I always make sure I give my best, despite my tight schedule.

WHO IS YOUR TARGET AUDIENCE WHEN WRITING THE BOOK?

Everybody is entitled to read the book. It is intended for a broad audience, including primary and secondary school students, as well as those attending higher education institutions. It can be used as literature. The book can also be used in West Africa or wherever the English language is spoken because the body that approved, recommended, and endorsed the book is formidable and well respected worldwide in the person of the Nigerian Educational Research and Development Council (NERDC), which is an agency of the Federal Government of Nigeria charged with the responsibility of implementing educational policies in Nigeria. Riot in Ubahu is not just a book but a mind-blowing book accessible to everyone. 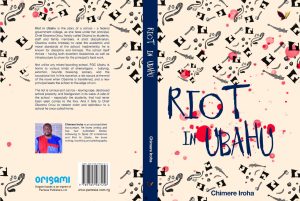 WHAT WAS YOUR EXPERIENCE LIKE WHEN YOU FIRST WROTE?

It wasn’t easy. No author will tell you that there is a particular formula or model he uses in writing; it all depends on where the spirit leads. I started by writing it in an exercise book, then I started typing it. It took me about 6 months to write Riot in Ubahu. Most times, inspiration to write doesn’t come until I play soft music to inspire me. It’s not easy to write, especially plotting and assigning characters, which at times can be very challenging. Then there’s the imagination aspect. You don’t need a Ph.D. to be a good writer; you can have it all and still be a bad one. Somebody like Charles Dickens doesn’t have any previous education, but he was a famous writer, like many others. Writing is all about imagination; if you don’t have a good imagination, you can’t be a good writer.

WHAT ARE THE CHALLENGES THAT WRITERS FACE?

Writer’s block. Sitting and not knowing what to write doesn’t mean you’re not creative; it simply means you’re lacking motivation at such times. Unable to produce new work or when you are experiencing a creative slowdown. Most people have their catalyst while writing; some believe they have to smoke cigarettes, etc., before getting inspired. I love listening to soft music or drinking coffee while writing; it inspires me. Sometimes I stroll around the environment when I have writer’s block. Another challenge that writers face is time. When you are exhausted from your paid job, leaving home in the morning and returning home at night, you find it difficult to write. Moreso, the environment you lived in may not have motivated you to write, especially when you lived in a noisy environment. Another thing is writing for passion and not for money. Your first aim should not be for money; money will come. Another important consideration when writing is the power supply. When there is no light to write, it kills morale. The culture of reading is also challenging. Writing and not having anyone read your book is always discouraging.

THERE ARE FEW PICTURES AND ILLUSTRATIONS IN THE BOOK; WAS IT A DELIBERATE ACTION, ESPECIALLY SINCE YOU ARE WRITING FOR STUDENTS? 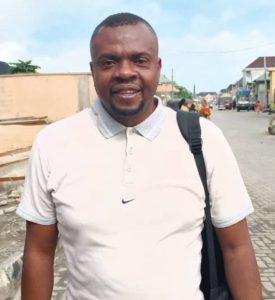 THIS BOOK WAS CREATED FOR AND RECEIVED FROM NIGERIANS; WHAT IS YOUR OPINION ON IT IN THE DIASPORA AFTER READING IT?

Well, this book is African literature. It is telling our stories to the world. People are buying books from Amazon and other parts of the world. We are using this book to showcase and export our culture to the world. We read foreign authors’ books, so why can’t they read ours?

WHAT WILL BE THE EXPECTATIONS OF STUDENTS WHEN THEY READ THE BOOK?

Well, the book is African, with good grammar and a rich vocabulary. The book deals with issues in education, and students reading this book will come to terms with new words.

ADVICE TO THOSE WHO WANT TO GO INTO WRITING?

Writing starts from passion though not everybody can be a writer because it has a lot to do with imagination. You have to build power and imagination. I have seen so many with Ph.D. in English yet they cannot write, and I have seen so many people with Master’s degrees in English and literature yet they cannot write. Writing has to do with creative writing. Creating something out of nothing. If you are not imaginary you might not do well.

CAN WE PLEASE HAVE AN INDICATION ABOUT THE BOOK?

Yes, I have the synopsis of “Riot in Ubahu”

Synopsis
Riot in Ubahu is the story of a school – a federal government college, as she fares under her principal, Chief Obanma Orizu, fondly called Obama by students, staff, and family members. A strict disciplinarian, Obama works tirelessly to raise the academic and moral standards of the school. Inadvertently, he is known for discipline and fairness. The school itself thrives – having both excellent Academics as well as infrastructure to show for the principal’s hard work.

Not unlike any mixed boarding school, FGC Ubahu is home to various kinds of shenanigans – bullying, extortion, bounds breaking, sorcery, and the occasional riot. In this narrative, a riot occurs at the end of the novel when Obama is transferred, and a new principal leads the school to the edge of ruin.

The riot is ruinous as it can be – leaving rape, destroyed school property, and hooliganism in its wake. A side of the school – especially the students, that had never been seen comes to the fore. And it falls to Chief Obanma Orizu to restore order and splendour to a school he once called home.

SOLUDO CELEBRATES BISHOP EZEOKAFOR AT 70, SAYS NO RIFT EXISTS BETWEEN HIM AND OBI BUT DIFFERENT POLITICAL VIEWS