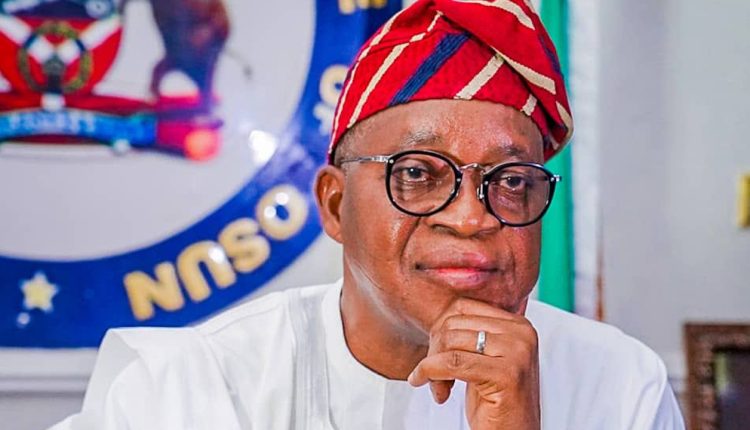 Osun State Governor, Adegboyega Oyetola says his victory in the July 16 governorship election would be a landslide and that the opposition will have no choice than to congratulate him.

Oyetola said that with the love and support of the electorate for him and the All Progressives Congress (APC), nothing can stop his re-election.

Oyetola said this during an engagement programme with United Nigeria Panel beater Association, Osun chapter on Tuesday at Akoda, Ede East LCDA of the state.

Represented by his Special Adviser on Civic Engagement, Mr Olatunbosun Oyintiloye, the governor noted that with the available meagre resources, he had put smiles on the faces of the people in the state.

Oyetola, who commended the people of the state for the huge support given to his administration since inception, urged them not to allow greedy politicians to destroy the giant strides the state had made.

According to the governor, governance is for serious minded people and not for those who lacked administrative capacity.

Oyetola said that the massive defeat suffered by the Peoples Democratic Party (PDP) and other opposition parties in Ekiti election, would be repeated  in the state In a greater dimension.

“With the massive support from the electorate, my victory in July 16 will be so clear that the opposition will be left with no option than to congratulate me.

“The overwhelming support from the electorate for me and APC is enough testimony that the opposition parties has lost before the election”, he said.

Oyetola, however, appealed to all registered voters, who are yet to collect their Permanent Voter Cards to do so and support APC during the election.

He also urged them not to sell their votes, adding that doing so will amount to sabotaging their future and that of the unborn generation.

In his remarks, the President of the Association, Chief Olalekan Lemo, commended the governor on his people oriented programmes and policies, which is affecting the masses positively.

He said, “We have a lots of boost in the areas of our business through series of interventions coming from government. We have never had it so good like this before. That is the reason we are our throwing our weight as an associations behind him for re-election, so that the goodies can continue.”