I will promote the advancement of women in leadership – Atiku 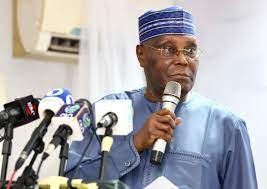 Chigozie Ikpo, Abuja
The 2023 Presidential Candidate of the Peoples Democratic Party, PDP, Atiku Abubakar has promised to promote the advancement of women in leadership across the country.
Atiku who made this known on Wednesday, while speaking at the Inauguration of the PDP Women Campaign Council, held at the Congress Hall, Transcorp Hilton Abuja, said women have the capacity needed for nation building.

He said that Nigeria as a country can do more in encouraging more women in leadership as they have a lot to offer, urging women not to hesitate to show their leadership potential.
He said “When I was Vice Presidential, I visited Sweden to have a meeting with the leadership of the government. Their government is headed by a woman prime Minister. The minister of foreign affairs was a woman, the minister of finance was a woman and the minister of education was a woman.
“By the time I looked at my delegation and I looked at the delegation of the Swedish government, I found out that my delegation consists only of men and I was embarrassed. I then committed myself that as long as I remain in politics, I will promote the advancement of women.
“Therefore, we have no hesitation whatsoever to make sure at the very minimal, we comply with the Beijing declaration. But I believe Nigeria can do more than that, because there are African countries that have more women in government than men.
The former Vice president noted that women who have a have the highest voting population play an important role in the democratic process, urging them to participate actively in the forthcoming 2023 general elections to ensure his victory at the polls.

“Women play an important role in our democratic processes. First of all we know that women have the largest voting population, and the most loyal party members. Therefore as PDP, that’s why we went a great length to make sure that we carry women and we support so women to participate actively in our democratic process and nation building.
“Our main objective of setting out the women campaign council is to make sure of your active participation, and by your active participation, we will be able to identify the talents available amongst you, so as to harness those talents, to help us build this country.
“There are many attributes that women have that men don’t have, for instance, you are less corrupt. So I challenge you all to show leadership by giving your 100 percent support to the party. With you and your full support and participation, victory for PDP is assured. So I call on you Nigerian women to come out, campaign, vote and make sure they are counted and protected at the polling units
In her remarks, the PDP Woman Leader, Professor Stella Effa-Attoe, outlined the importance of the PDP Women Campaign Council, pledging their solidarity to the Presidential Candidate of the party as well as other candidates of the party nationwide.
“The Women Campaign Council will serve as the bedrock and biggest chunk of geometric mobilizers of the Nigerian electorate to vote massively for our presidential candidates and for all PDP candidates in every position in Nigeria. Let me reassure you that our unalloyed solidarity and commitment towards the success of our great party in the 2023 general elections are unwavering. The PDP women are ready, our strategies and approaches are top notch and clear cuts.

“We will campaign and mobilize from every home, family, pooling units, wards, local government, state and even the FCT to garner all the votes that will be needed to make our party coasts home to victory in a landslide manner.” she said
Also speaking at the event, Wife of the PDP Presidential Candidate, Titi Atiku Abubakar said the country is currently facing serious issues across all sectors, urging women to to come together to deliver the Atiku/Okowa ticket which is the guaranteed vehicle to drive the country to the right path.
“It’s pertinent to note that serious issues bedeviled our nation, such as insecurity, the educational sector, the health sector, infrastructure continue to drive the citizens of this country to see for a new leadership direction and political paths. It cannot be much more emphasize that the current leadership of this country has failed massively in delivering these basic dividends of democracy to us.
“Together, we can do more as we assure the success of the Atiku-Okowa tickets through the strategic activities of this Women Presidential Campaign Council in pursuant to the main goal of our candidates and his indefatigable running mate, to recover Nigeria. We must continue to campaign on the critical issues that concerns average Nigerian while refraining from the playground of those who do not possess the creative ideas to take our country to the promised land.
The Chairman of the party, Chief Iyorchia Ayu, inaugurated the PDP Women Campaign Council and promised that women would get more than the proposed 35% affirmative action for women in leadership.
The event was well attended by top delegates of the party, members of the party National Working Committee, Senator minority leader, Philip Aduda, members of the PDP presidential campaign council, wives of the Delta and Edo State Governors and PDP women from various states of the country.
Continue Reading
I will promote the advancement of women in leadership - Atiku
24
Share FacebookTwitterWhatsAppPinterestEmailFacebook MessengerLinkedinTelegram