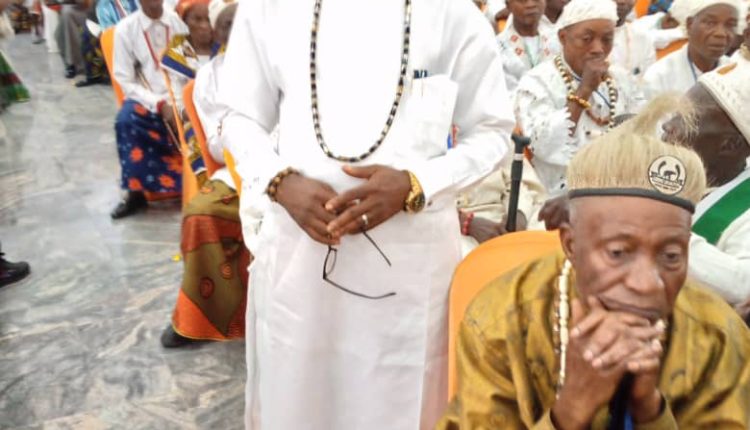 *Wants him to fulfill promise to give them certificate of recognition made in 2015/2019.
Akaiso Akaiso, Uyo.
As Akwa Ibom state celebrates 35th anniversary, the clan of family heads, Mbong Ekpuk Akwa Ibom state has expressed happiness with Governor Udom Emmanuel for his superlative performance in all spheres of development, be it roads construction, industrialization and what have you, for the past seven and a half years on saddle as the state helmsman.
The state coordinator of the forum, Obong Idongesit Okon made the feeling of members known at Akwa Ibom state traditional rulers council, Uyo during the swearing in/presentation of staff of office to the newly recognized 4th paramount ruler of Ini local government, HRM Edidem Udoette Edon, the Osung V of Nkari Clan by Gov. Udom Emmanuel on Saturday, to mark the 35th anniversary of Akwa Ibom state.
Speaking at the end of the event which also featured presentation of certificate of recognition to nine clan heads, the Etim Ekpo born royal father said over three quarters of the people converged on the venue of the epochal event were family heads who had come expecting to hear from the governor announcing their official status as recognized Family heads, Mbong Ekpuk Akwa Ibom State and perhaps their welfare.
But, according to him, they were grossly disappointed because the governor didn’t only refuse to say something positive in that direction but also kept mute about fulfilling the promises he made in 2015 and repeated in 2019 to them during his campaigns.

For avoidance of doubt by those who may want to know, the governor had in 2015 promised to accord official recognition to the clan of family heads, Mbong Ekpuk Akwa Ibom and welfare package for their support towards his successful election before exiting office in 2023.
Following overwhelming support the governor enjoyed from the forum in his first outing, he repeated the same promise in 2019 which made them to join hands with the rest of Akwa Ibomites for his second and final ticket. According to him, the way things look now is like the governor has reneged on his promises by refusing to make this vital pronouncement which was why the feeling of entire family heads was sad as seen at the background.
However, he commended Governor Udom Emmanuel for being the first sitting chief executive officer of the state to have given approval for the forum to inaugurate its maiden state executive council which took place on 24th June 2021at the prestigious Ibom Hall, Uyo,
adding that they are worried that if he leaves without giving official recognition status to the forum it might take longer than necessary for subsequent administrations to do so.
“Mbong Ekpuk Akwa Ibom state was founded by Obong Archibong Edem Akpan from Ekpene Ibia in Uruan local government in 2007 to unite all the family heads. The problem Obong Archibong had during his headship of the forum was lack of recognition and issuance of certificate by the then government.
“On 24th June 2021 the maiden state executive council of the forum was inaugurated on approval of governor Udom Emmanuel for which we are grateful. Based on this and promises he made in 2015/2019, these people pointing at his members at the background came expecting him to issue certificate of recognition to the forum.
The family heads are not happy because the governor has not made that pronouncement”.
He commended the commissioner for local government and chieftaincy affairs, Mr. Frank Archibong for soliciting on their behalf to the governor to see the need to accord the clan of family heads, Mbong Ekpuk Akwa Ibom state certificate of recognition.
He observed that 95% of village heads  tussles presently in court were caused by none recognition of family heads who would have been in position to do successful election or selection of village heads.
He therefore opined that if government wants to avert further crisis of village headship between families, individuals and groups which sometimes lead to death and destruction of property worth millions of Naira, certificate of recognition should be given to family heads to embolden them to carry out this traditional function.