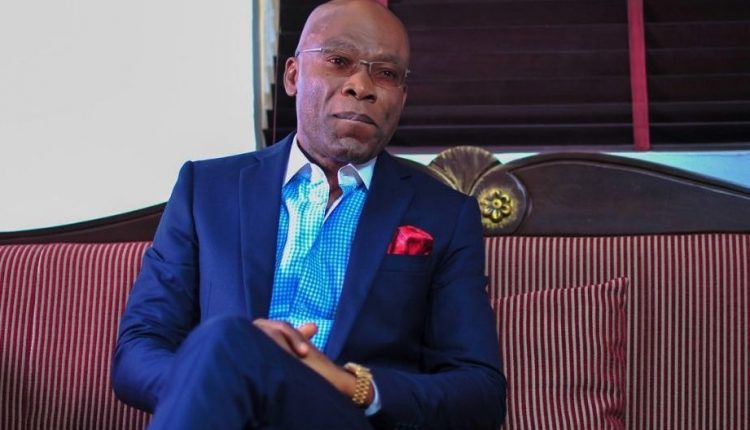 The recent award to Leo Stan Ekeh  as Forbes Best of Africa Leading Tech Icon Award is indeed a veritable testament of the ingenuity of this digital entrepreneur and Chairman, Zinox Group who has not relented in any way in ensuring Nigeria remains relevant in the digital global eco system

For industry pundits, the conferment with the prestigious and highly coveted Forbes award did not come as a surprise, rather as a matter of time.

The well-deserved accolade marks the latest in a long list of credible local and international awards and recognitions received by Ekeh for his over three decades of leadership and pioneering entrepreneurship in the Information and Communications Technology (ICT) space in Africa, as well as his many enduring philanthropic and humanitarian legacies.

As an Africa’s foremost serial digital entrepreneur, seasoned leader, administrator  Leo Stan is one man who has demonstrated a great capacity to lead men where they ought to be and shown that nothing is so conclusively proves a man’s ability to lead others as what he does from day to day to lead himself.

The measure of this great man of our time is seen in terms of the strength of his leadership commitments, the genuineness of his friendships, the sincerity of his purpose, the quiet courage of his convictions, his capacity to suffer and his willingness to endure in order to achieve success and put smiles in the lives of many.

Loathe him with every fibre in your vein, treasure him with every air you breathe or be apathetic to his style, philosophy and essence, Leo Stan Ekeh is a man you could say has fulfilled his destiny in digital eco system  and still forging ahead.

He is clearly one of the leaders in Nigeria that has distinguished himself not only as a dynamic business administrator, innovative manager, technocrat  and digital entrepreneur but also shown a high degree of integrity and transparency in both private, religious and public affairs.

His ingenious, creative, pragmatic and resilient approach to leadership has brought a lot of transformation to his company Zinox Group which is Sub-Saharan Africa’s biggest integrated technology conglomerate which includes viable concerns such as Zinox Technologies Limited, Task Systems Ltd., Technology Distributions Limited (TD Africa) and TD Mobile, among others, through which Mr. Ekeh has deployed some of the biggest ICT projects on the continent.

Leonard Stanley Nnamdi Ekeh (better known as Leo Stan Ekeh is a globally recognized tech guru, who on the anniversary of Nigeria’s Independence on October 1st 2001 enjoyed the rare privilege of being honoured as an Icon of Hope by former President, Chief Olusegun Obasanjo for his sustained pioneering efforts in the area of Information Technology and also as a pride to modern Nigeria.

Absolutely, his character and actions epitomize the true face of Technology, Christianity, patriotism, nationalism, and optimism as he is leading a new agenda for digitalization of the nation.

As a matter of fact he has also inspired several generations of budding entrepreneurs and startups, many of whom are currently disrupting the technology space in Nigeria and beyond.

Mr. Ekeh’s groundbreaking strides in the Nigerian technology ecosystem recorded another major achievement in 2018 when he made a bold return to e-Commerce (a vertical he pioneered in Africa many years ago through BuyRight Africa Dotcom) with the addition of Konga after acquiring the company from previous majority investors, Naspers and AB Kinnevik. Barely two years after its acquisition, Mr. Ekeh has since transformed the composite e-Commerce giant into Nigeria’s leading player, with the brand on the cusp of dominating Africa’s biggest market and making inroads into other neighbouring African markets.

As at today his company  Konga Nigeria’s leading composite e-commerce giant, is set to become one of the biggest employers of labour in Nigeria after unveiling plans to provide meaningful employment opportunities for over 500,000 Nigerians as well as another 500,000 in other African countries by 2025

Indeed, the story of Mr. Ekeh’s legendary strides is one of many firsts amid a series of landmark achievements in his chosen field of Information and Communications Technology.

He pioneered Desktop Publishing and Computer Graphics in Nigeria in 1987 with his first Company – Task Systems Ltd. In addition, Mr. Ekeh launched the first ICT support Company in Nigeria – ITEC Solutions Ltd. Additionally, he pioneered the deployment of digital dispensing pumps for petrol and gas stations in Nigeria in partnership with Elf Oil (now Total Plc.) after he was cheated by an attendant at a fuel station. He also pioneered ICT Distribution in West Africa with the launch of Technology Distributions Ltd. (today known as TD Africa) which has remained the biggest technology, lifestyle and cutting-edge solution distributors in the West African sub-region.

Equally important, the biometric digital revolution in Nigeria can be attributed to Mr. Ekeh after he singlehandedly delivered the Independent National Electoral Commission (INEC) voters’ registration in 2006 when foreign contractors could not deliver after months of promises. Four years later, he again supervised the biggest single ICT digital rollout in Africa with INEC in 2010 valued back then at over $170m, as well as the largest single e-Library and Wireless Cloud rollout project on the continent through one of his companies – Zinox Technologies Ltd.  Today, Ekeh’s contributions and sterling work with INEC have gone a long way in giving Nigeria a credible database of voters and reduced post-election litigations by over 45 per cent.

Mr. Ekeh has also been involved with companies such as ICT Brokers, TD Plus, ICT Connect and, as earlier stated, the launch of Africa’s first ever e-commerce outfit, Buyright AFRICA Dotcom.

A major advocate of digital literacy for all, Ekeh holds the enviable record of donating cutting-edge and well-equipped digital centres to several secondary and tertiary institutions in Nigeria. Significantly, Ekeh’s Zinox Group pioneered the unheralded but highly commendable practice of paternity leave in Nigeria to reduce stress on young male staff and enable them support their spouses when they welcome a new baby.

Mr. Ekeh, a renowned digital democrat and philanthropist, has also quietly touched so many lives through the Leo Stan Foundation – his personal foundation. Among these are charitable works such as donation of N100m to Internally Displaced Persons (IDPs) in the North-East, donation of N50m to victims of the demolished Eke-Ukwu market in Imo State, scholarships to hundreds of indigent students across Nigeria to study both at home and abroad,  as well as the set-up of a N1.5bn revolving loan scheme for disadvantaged students and entrepreneurs of Imo origin, among several others.

Furthermore, Ekeh has silently invested in education, provided Medicare to the needy and supported churches and other religious organizations through the Foundation. During the lockdown occasioned by the COVID-19 pandemic, the Leo Stan Foundation leveraged on staff of the various companies in the Zinox Group to feed over 7000 families across Nigeria for two weeks. He has also regularly supported state governments in Imo, Lagos and other parts of the country through the donations of patrol vehicles to improve security, among other donations.

The tech enthusiast is one of the foremost champions of gender equality in Nigeria. He has consistently advocated for and also empowered women and the girl child, whom he regularly addresses and challenges to aspire to greatness at various public events and fora. His passion for gender equality can be seen at first hand in the Zinox Group where women, led by his wife, Mrs. Chioma Ekeh, occupy the first four executive management positions at TD Africa, the biggest company by revenue in the Group. Also, he had recently appointed another female as Managing Director of Zinox. The Group’s Human Resources Unit is also headed by a female.

Mr. Ekeh’s unerring zeal for productivity and excellence was recently rewarded by the current administration of President Muhammadu Buhari with the National Productivity Merit Award (NPOM) in November 2019.

A distinguished member of the Nigeria Economic Summit Group and Fellow of the Nigeria Computer Society, Ekeh is a recipient of one of the country’s highest National Honours – Order of The Federal Republic (OFR).

Applauded by professionals as a global digital giant and a man whose vision and performance shore up credibility for the indigenous capacities in the ICT sector, Leo Stan Ekeh’s unmatched interventions have seen him receive over 60 local and international awards. He has also served on a good number of Federal Government Committees, which includes the Presidential Committee for Job Creation, Nigeria Thinkers, ICT Roadmap, among many others.

He is happily married to Mrs. Ekeh, a Mathematician, Fellow of the Association of Chartered Certified Accountants (ACCA) and CEO of TD Africa.

The union is blessed with successful children

As we celebrate the life of this Corporate Leader and Forbes Best of Africa Leading Tech Icon, a man of great repute, leader of men, a man with dignity, an achiever, a man of the people for the people, a Philanthropist and Christian per excellent Leo Stan Ekeh Ekeh philosophy of his life  is fortified by his deep personal commitment to the self-worth of work being more treasured and ensuring he put smiles in the life of many.

Obviously, Leo Stan Ekeh stands high as a real Global and Nigerian Christian from the southeast. His love for God and humanity is highly contagious, it stands him out as an outstanding Nigerian corporate leader and nationalist. He is without question a visionary entrepreneur Nigerian who has over the years been working unobtrusively to support all kinds of people, essentially the needy.

However, in his acceptance speech, Ekeh expressed gratitude to Forbes and the Foreign Investment Network (FIN) for the recognition. Also, he reaffirmed his often-stated interest in technology as a game-changer, while also expressing his passion for humanity which he revealed is driven by access to education and quality health.

Further, he appreciated Nigerians and her leadership and Africans by extension for trusting him and his colleagues’ ingenuity across his technology group.

Ekeh said: ‘‘The 21st Century is one in which the impact of technology in the affairs of nations and in the lives of individuals cannot be wished away. Indeed, the world is currently a technology-mediated global village, with technology remaining, as I have often stated in some of my public talks, arguably the only profession in the world today that can transform an indigent child or youth into the richest person in the world.

The Forbes Best of Africa Awards 2021 aims to recognize and reward change-makers, individuals and organizations that have made remarkable difference on the African continent, improving the lives of millions across the region in the areas of entrepreneurship, technology, leadership, vision and influence despite the challenges posed by the COVID-19 pandemic.

How my govt has strategized to forestall EndSARS’ repeat- Sanwo-Olu

How my govt has strategized to forestall EndSARS’…

Mykmary Fashion Show 2022 to spice up things with the…

The national unity gap widens as debate on Muslim-Muslim…