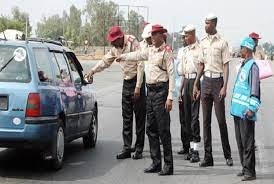 The Ogun State Command of Federal Road Safety Corps (FRSC), has warned motorists against speeding and dangerous driving, especially at construction zones, to stem road crashes during the Yuletide.

Ahmed Umar, the FRSC Sector Commander in the state, gave the warning in an interview with the News Agency of Nigeria (NAN) Sunday in Ota, Ogun.

Umar said that motorists travelling during this festive period to celebrate with their loved ones should be careful and pay special attention to construction areas where overtaking is prohibited.

“The FRSC implored them to adhere strictly to maximum speed perked at 50km per hour, especially at construction zones where traffic is diverted.

“In addition, they should ensure that their journeys are properly planned, with their vehicles routinely serviced,” he said.

The sector commander stressed that motorists should show love to fellow road users by sharing the road responsibly and obeying traffic rules to get to their various destinations safely.

Umar warned motorists against drunk driving as brethlisers would be used to test drivers for alcoholic consumption.

He added that radar guns would also be used to detect speed of oncoming vehicles to reduce road crashes to the barest minimum.

Umar said that the FRSC had deployed both Regular and Special marshals for its Special Patrol, which commenced on Dec. 15. It will end on Jan. 15, 2023, to control traffic gridlocks across the state.

The sector commander listed some of the areas, where the presence of the FRSC personnel would be felt to include Lagos-Ibadan Expressway, Sagamu-Ijebu Ode, Abeokuta-Sagamu, Sango-Ota -Idiroko Expressway, and Abeokuta-Ibadan, among others.

He said that personnel would focus on violation of speed limits by all categories of vehicles, wrongful overtaking, lane indiscipline, use of cellphone while driving, dangerous driving, tyre violation, unlatched cargoes, use of drugs and intoxicating alcoholic beverages, among others.

The FRSC boss admonished motorists that anyone apprehended flouting traffic rules during the festive period would have their vehicles impounded and be prosecuted accordingly.