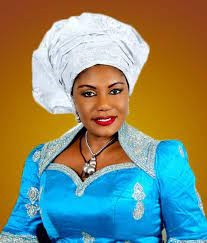 Youths in Oyi Local Government Area of Anambra State, under the umbrella of United Ogbunike Youths Association UOYA, has urged the wife of the Anambra State Governor, Mrs Ebelechukwu Obiano to run for senate to represent Anambra North in the forthcoming general elections.

The group said that the reason for their quest was for the governor’s wife to continue in the good work she is doing and also attract more development to Anambra North constituency.

Addressing journalists after a meeting of the group, the National President of the group, Mr Okonkwo Ikechukwu said the group has observed that Mrs Obiano recorded tremendous human and infrastructure development, during her husband’s administration, despite not holding any office.

While noting that contesting and winning a Senate seat would offer her veritable opportunities to continue to promote human development, he said, “Mrs Obiano empowered many of our youths in Ogbunike. She has placed some in various lofty positions. Youths of Anambra North are beckoning on her to declare interest in the Senate race.

“Apart from what she is doing in Anambra State, right now, she is giving a facelift to maternity homes in Osile and Ifite Ogbunike.

“Before now, Ogbunike never produced a Chairman in Oyi Local Government Area (LGA), but through her quest for equity, Oyi now has a Transition Committee Chairman, Dr Nnamdi Nwadiogbu.

“All these were part of our demands in 2014 when we paid her a courtesy visit, a few months after the assumption of office her husband as Governor.  From our observation, she has commenced her promise to complete the construction of Oye Olisa road to Umunya community.

“She cannot stop at this level, but ought to come into politics. So, we urge our people to continue to express their gratitude to her, to enable her to do more in touching more lives,” Okonkwo said.

At the moment, former Aviation, Minister Princess Stella Oduah is the one representing the zone at the upper legislative chambers.

THE CUSTOMER’S COMPLAINT THAT WRECKED HAVOC ON SALES OF A CAR BRAND.