Why I approved redesign of Naira notes locally – Buhari 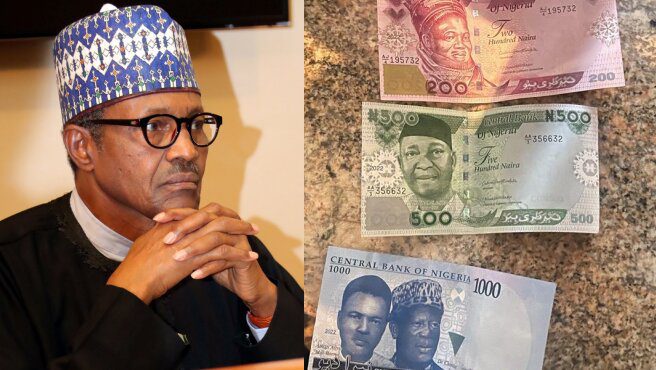 Speaking at the inauguration of the new banknotes which preceded the Federal Executive Council (FEC) meeting on Wednesday in Abuja, Buhari explained in detail the basis for his approval to the Central Bank of Nigeria (CBN) to redesign the ₦‎200, ₦‎500 and ₦‎1000 banknotes.

According to the president, the new Naira banknotes have been fortified with security features that make them difficult to counterfeit.

In a related development, the Attorney-General of the Federation and Minister of Justice, Abubakar  Malami, SAN disclosed that the Buhari administration had so far recovered over one billion dollars from its inception to date.

He added that the new banknotes would help CBN to design and implement better monetary policy objectives, as well as enrich the collective memory of Nigeria’s heritage.

Buhari commended the CBN Governor, Godwin Emefiele, and his Deputies for the initiative.

He equally thanked the Managing Director, Executive Directors, and staffers of NSPM PLC “for working tirelessly with the apex bank to make the currency redesign a reality, and for printing the new Naira notes within a comparatively short time.”

According to him, international best practice requires central banks and national authorities to issue new or redesigned currency notes every five to eight years.

Buhari said that it was now almost 20 years since the last major redesign of the country’s local currency was done.

The president said that implied that the Naira was long overdue to wear a new look.

He said: ‘A cycle of banknote redesign is generally aimed at achieving specific objectives, including but not limited to improving the security of banknotes. It is also aimed at mitigating counterfeiting, preserving the collective national heritage, controlling currency in circulation, and reducing the overall cost of currency management.

‘‘As is known, our local laws, specifically the Central Bank of Nigeria Act of 2007, grants the CBN the power to issue and redesign the Naira. In line with this power, the bank’s Governor approached me earlier in this year to seek my permission to embark on a currency redesign project. I considered all the facts and reasons presented before me by the Central Bank.”

Buhari, therefore, expressed the hope that the new notes would address the urgent need to take control of currency in circulation.

He said that it would also address the menace of hoarding Naira banknotes outside the banking system and curb the shortage of clean and fit banknotes in circulation.

Buhari added that the redesigned notes would also address the increase in counterfeiting of high-denomination Naira banknotes.

”It is on this basis that I gave my approval for the redesign of the ₦‎200, ₦‎500, and ₦‎1000 banknotes. While this may not be apparent to many Nigerians, only four out of the 54 African countries print their currencies in their countries, and Nigeria is one. Hence, a majority of African countries print their currencies abroad and import them the way we import other goods. That is why it is with immense pride that I announce to you that these redesigned currencies are locally produced right here in Nigeria by NSPM Plc,’’ he said.

In his remarks, Emefiele thanked the president for his unwavering support for the redesign and distribution of the new notes.

According to him, the new notes will control inflation, make policies more effective, ensure financial inclusion and fight corruption.

He also said that by international best practice, the redesign of notes should be every five to eight years.

He said,” and the currency in circulation had been in use for 19 years, with spiraling challenges on the economy, especially on security and counterfeiting.”

Emefiele also appreciated the president for his insistence that the initial notes must be designed and produced within the country, further placing confidence in NSPM Plc.

“Mr. President, only a President of your esteemed and incorruptible stature could have done what we are witnessing today,’’ he added.

Meanwhile, the Federal Executive Council has approved an extension of the National Anti-Corruption Strategic Document from 2022 to 2026.

The Minister of Justice and Attorney General of the Federation, Abubakar Malami, made this known when he briefed State House correspondents on the outcome of the Council meeting,

The meeting of the council was presided over by President Muhammadu Buhari, at the Council Chamber of the Presidential Villa, Abuja, on Wednesday.

He said the approval was granted following the presentation of a memorandum to the Council to that effect.

Malami said: “Today, the office of the Attorney General of the Federation presented a Council memo, seeking approval for the validation, adoption, and extension of the National Anti-Corruption Strategy Document from 2022 to 2026.

“I am happy to report that the memo was taken, deliberated upon, and eventually approved by the council. The implication of which is that we now have in place a new anti-corruption strategy policy document which is a product of collaboration among the justice sector and law enforcement agencies.”

According to the minister, this follows the chain of successes recorded in the fight against corruption, which is a hallmark of the Buhari administration.

“Today, we are recording successes in terms of corruption convictions, to the extent that a single agency of government like the Economic and Financial Crimes Commission (EFCC) within a year, (2022) we have recorded over 3000 convictions,” he said.

He added that the proceeds of the fight against corruption had been plowed into the nation’s economy as a means of impacting the livelihood of Nigerians through programs like the school feeding program, among others.

Also addressing the correspondents on the outcome of the meeting, the Minister of Works and Housing, Babatunde Fashola, said the Council approved N14.09 billion as an augmentation of the contract sum for the construction of a road in Kano State

He said the contract was inherited from previous administrations, expressing the determination of the  Buhari administration to complete the project.

“The Ministry of Works and Housing presented a council memo to get approval for the augmentation of the contract price for the completion of the Kano Western bye-pass which we inherited.

Fashola said: ”The project had essentially not been funded in previous budget years. We are now executing it by the Sukuk Bond.

”Council considered and approved the augmentation which was for N14.095 billion.”

Some of the items covered by the augmentation include the old amount for Value Added Tax (VAT), which was increased from 5 to 7.5 percent.

“This is to help drain water, especially in the parts of the road that pass through the city centers and towns and the council approved this,” he added.

According to Fashola, the road, when completed, will link the Kano-Maiduguri highway which is almost completed.

He also said the ministry sought the council’s approval to use the funds approved for the construction of a trailer park along the Enugu-Portharcourt highway, to complete the main carriageway.

‘’This is because of the litigation we are facing from the communities where the trailer park is to be located, whose land was acquired for the construction of the park.

”In order not to delay the completion of the main carriageway and also to optimize today’s pricing, we sought approval and council approved that based on the recommendation,” Fashola said.