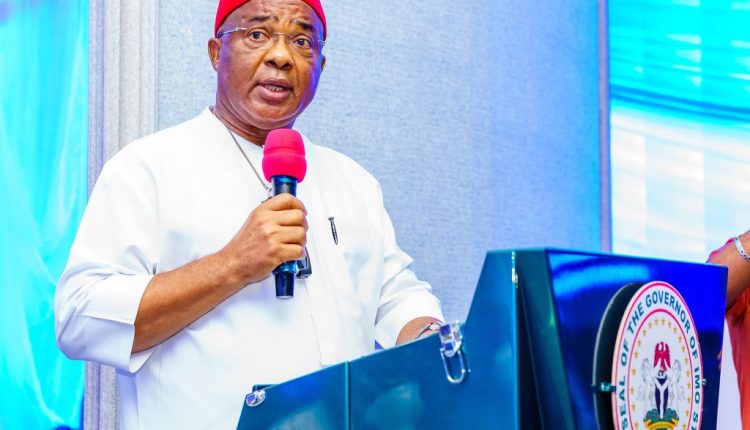 According to the Governor,  the market square,  was discovered by security agencies to be  a place for the production of Improvised Explosive Devices (IEDs) by bandits and other criminal elements.

Addressing a press conference in  Owerri, the Governor called on  Imo indigenes –  leaders, men, women, youths, both those resident in the State and those visiting, who have information that can lead to where bandits are hiding or operating within the State to avail government of such information in the interest of all.

He said, ” security report revealed that Eke Ututu  market square was turned into a hiding place for bandits and kidnappers who, not only compelled the traders to pay taxes to them before they could open their shops for business, but also use the market to manufacture IEDs with which they operate within and outside  the area”

The  Governor further said, ,”report indicated that an Army Major working in the State recently fell victim to the IED planted at the market square  as he was killed instantly after stepping on the locally manufactured explosive unknowingly.”

He said, ”  one of the bandits arrested at their Camp at Orsu Ihitte Ukwa gave the military hint about their mode of operation within the vicinity, including where they maintain shops for fertiliser and other gadgets at Eke Ututu where they manufacture the IEDs.”

Unfortunately, on the day the military went to the market with the arrrested bandit, the Captain who led the team also mistakingly stepped on an IED that was carefully hidden at the place and in the process he was badly injured that he had to be admitted at the intensive care unit of the Federal Medical Centre Owerri.

Angered by these developments, particularly the loss of their senior officer and the wounding of another, the Armed Forces authorised a combined operation involving their men from Imo and Anambra States at Orsu Ihitte Ukwa, mainly the Eke Ututu axis and its neighbouring state of Anambra.

The Governor said that it was in the process that the security agencies razed the market.

The Governor emphasized that his government will stop at nothing in the fight against terrorism, banditry and kidnapping in Imo State and that it will be pursued to a conclusive end.

“This is not politics, it is about the security of lives and property of our people.  And anybody who wants to play politics with this should be ready to face history that will judge all of us.”

He regretted that the opposition Peoples Democratic Party and their members have been trying to make a political capital of the incident, howbeit ignorant of what transpired, noting that it is not in doubt they have a hand in the spate of banditry, kidnapping and other forms of criminality in Imo State.

The Governor said from the behaviour of the PDP members in Imo State they want to frustrate the conduct of elections in Imo State.

Governor Uzodimma however pledged to continue to support the security agencies to do their work, notwithstanding the collateral damage that may go with it.

“Only last Saturday the Joint Security Forces who arrested one of the bandits took him to where they operate from to go and visit where the local explosives are manufactured.  It turned out to be at Eke Ututu market where four shops were stocked with fertilizers, ammonia sulphate and other electrical gadgets used in manufacturing explosives were packed.

“Unfortunately, the Army Captain that led the operation to the market is now lying critically at the Intensive Care Unit (ICU) of Federal Medical Centre Owerri as a result of attack he sustained in the operation.

“Consequent upon the above, the soldiers were able to recover all the weapons and the fertilizers meant for the  manufacture of  the local Improvised Explosive Device.  In the process of this operation the Military burnt down the shops as this is consistent with their policies.

“The Good news, however, is that they were careful and so tactical that no live was lost.  They were only able to destroy the shops where they met these items and came back.

“It pleased some citizens of the State, most of them who are candidates running for elections in some political parties, to condemn the activities of the security agencies, some brazenly blackmailing the security agencies on why should they go there at all, when none of them made any attempt to visit the scene (Eke Ututu).

“These are Imo people, some are at Abuja speaking to the Media while others are in Owerri ranting while Imo State is bleeding.

“In the same Eke Ututu market, some natives and traders cannot go to the market without paying illegal taxes to the bandits and unknown gunmen to enable them open their shops.  This,  unfortunately, is what government had been fighting all through.”

Governor Uzodimma promised that “Government is in a position to deal with any collateral damage that may go with the security agencies operations as it concerns the destruction of shops and historical significance of Eke Ututu market, but lives lost can never be recovered.”

He added: ” When Eke Ututu is destroyed to give Imo people peace, Imo government can rebuild the market and if in the process properties and items are lost government can work out compensation, but government has the responsibility to fight crime.”

He equally recalled Government’s call on the bandits and the unknown gunmen to seize fire, surrender and lay down their arms, discuss with government so that government can work with them in terms of rehabilitation and empowerment.

“Why some answered the call, surrendered and are talking with government, the adamant ones continued visiting mayhem and destroying properties of innocent Imo citizens.

“It is now a clarion call for all Imolites, both those residents and those visiting to volunteer information that will lead to managing insecurity in Imo State.”

Enugu is peaceful because Gov. Ugwuanyi is a peaceful leader, says Kanu Nwankwo