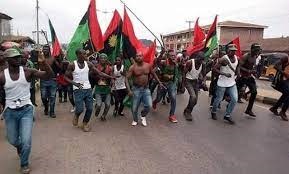 The Indigenous People of Biafra (IPOB), has said that it has not sent anybody to solicit for fund for it contrary to reports reaching it.
In a statement issued by the media and publicity Secretary of the group Emma Powerful, it said it has received complaints that some unscrupulous people approached politicians in Nigeria, soliciting financial support on its behalf.
Following this, the group in a statement on Sunday said: “we wish to clarify that IPOB has NEVER, and will NEVER ask anybody to beg for such financial support.
“IPOB under the able leadership of our Leader Mazi Nnamdi Kanu did not send anybody on such shameful errand”.
It said that IPOB as a global movement with members in over 100 countries know how it raises its funds.
It added: “We don’t solicit financial support from politicians. We have nothing to do with Nigerian politicians; we don’t need their money!
“Therefore, anybody no matter how highly or lowly placed or even related to our Leader Mazi Nnamdi Kanu, parading as a representative of IPOB sent to collect financial support from any politician is on his or her own. Such impostors assuming the complaints are correct are scammers. They don’t have the mandate of IPOB”, it said.
It warned that anybody who goes about soliciting for money is a swindler and if caught  will live in regrets the rest of his or her life#.

We ‘ve no mandate to zone Presidency, other political offices – PDP Committee