In their final Group C match against Burundi at the Women Africa Cup of Nations in Morocco on Sunday, record winners Super Falcons set the tone with three goals in the first four minutes to secure a 4-0 victory and a place in the quarterfinals. As a result, the Falcons’ match against Cameroon in the […] 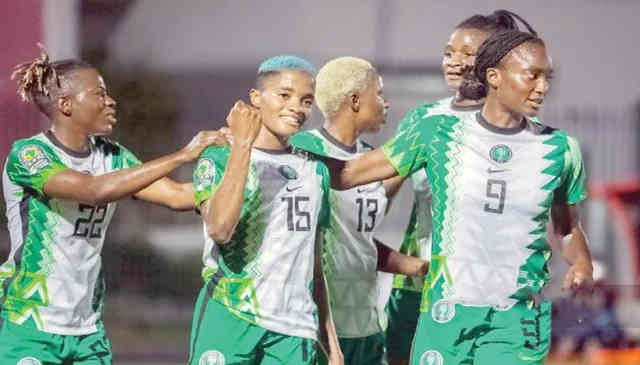 In their final Group C match against Burundi at the Women Africa Cup of Nations in Morocco on Sunday, record winners Super Falcons set the tone with three goals in the first four minutes to secure a 4-0 victory and a place in the quarterfinals. As a result, the Falcons’ match against Cameroon in the round of 16 on Thursday is now poised to be explosive.

Forward The star player of the Nigerian team, Rasheedat Ajibade, opened the scoring in the 25th minute. Later in the game, the Athletic Madrid player assisted Peace Efih in scoring the second goal, and Uchenna Kanu scored the third and fourth goals, respectively in the 29th and 46th minutes.

Halimatu Ayinde, Michelle Alozie, Rita Chikwelu, and Francisca Ordega were all replaced by Efih, Kanu, Christy Ucheibe, and Nicole Payne in Randy Waldrum’s four-change lineup from the team that defeated Botswana 2-0 on matchday two of the tournament. Ajibade, who was unquestionably the game’s finest player, repeatedly created issues for the Burundians and was the pivotal player as the Falcons successfully applied their high-pressing strategies.

Just two minutes into the contest, the West Africans took the lead when striker Ifeoma Onumonu missed the target after receiving a beautiful cross from Ngozi Okobi-Okeoghene. It took the nine-time winners 25 minutes to breach their opponent’s defence as Ajibade outran her man and was taken down in the box by goalie Eanine Irakoze despite their early domination.

The former Robo Queens striker picked herself up and calmly converted the ensuing penalty from the line. Following the restart, Ajibade’s excellent cross was met by Efih, who scored to increase the lead. With no indications of stopping, Waldrum’s team kept up the pressure, and they were rewarded when Kanu scored the third goal with another Ajibade assist. Kanu initially believed she had scored twice in one game, but her attempt was rightfully disallowed for offside.

As the nine-time champions advanced to the round of eight as Group C runners-up with six points — behind leaders South Africa, who were held to a scoreless draw to wrap up their group phase campaign with seven points after earlier victories over Nigeria (2-1) and Burundi — Ajibade once again provided the assist, setting up Kanu for her second of the night (3-1). The other eight games feature hosts Morocco vs. Botswana, South Africa vs. Tunisia, who finished third in Group B, and Zambia vs. Senegal, who are making their debut.

The winners of the final eight games will automatically qualify for the 2019 World Cup in Australia and New Zealand, with two losing quarterfinalists still having a chance to do the same via intercontinental play-offs.