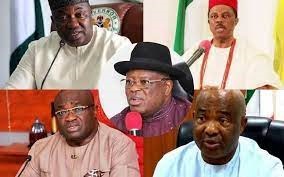 0 70
Share
COSMAS CHUKWU, Enugu
Controversy over the collection of Value Added Tax, VAT, update on the anti-open grazing legislation and security are ecpected to top the agenda of a meeting of Southern Governors Forum to be hosted Thursday by Governor Ifeayi Ogwuanyi of Enugu state
Apart from being the current srate capital, Enugu has been the capital of the defunct Eastern Region of Nigeria and to some extent remains home to every Igboman and the defacto epicentre of Igboland.
Enugu is also the headquarters of the Conference of South East Governors Forum and the seat of the Igbo apex socio-cultiral body,Ohanaeze Ndigbo.
The coming of the southern governors and their meeting in Enugu is historical as it is epoch making marking the true realization of the hitherto elusive handshake across the Niger.
The first and second meetings held in Asaba, Delta state and in Ikeja, Lagos state respectively.
So it is expected that the 17 governors of southern Nigeria will on Thursday, September 16, 2021, converge on Enugu for their third consecutive meeting this year.
At the last meeting,  it was resolved that member states should enact the much expected anti-open grazing law with a deadline put on September1,2021.
Some states have complied while some are feetdragging just as  a few appear to be reneging on the issue.
It is expected that the law will form part of the agenda as well as other anti south policies of the Federal Government.
Similarly the governors are expected to arrive at a common position on who should collect VAT between the frderal and state  governments for which Rivers and Lagos  have enacted laws.
The issue of security challenges will also be discussed Daily Champion further  learnt.
Enugu state joined the league of anti-open grazing law compliant states when on September 2, 2021, its Assembly passed the bill with hopes of its being assented.
The meeting being hosted by Governor Ugwuanyi holds at the Government House, Enugu.
Continue Reading
anti-open grazingsecurity top agenda as Enugu hosts southern govs ThursdayVAT
0 70
Share FacebookTwitterWhatsAppPinterestEmailFacebook MessengerLinkedinTelegram