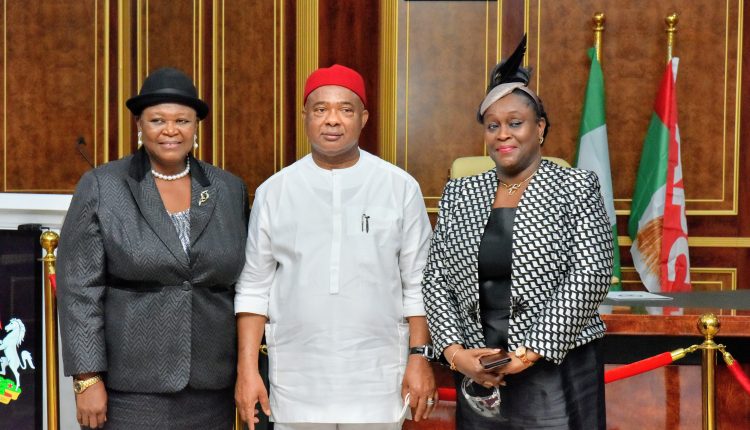 During the swearing-in, the Governor charged the newly appointed Acting Chief Judge to unify both the Bench and the Bar for a stronger and virile judiciary in the State.

Performing the ceremony at the New Executive Council Chambers, Government House Owerri, Thursday, the Governor told Hon. Justice Chikeka and the audience that her “appointment and swearing-in is a call to duty aimed at inspiring and unifying the Bench and the Bar and making the entire judiciary more efficient and effective.”

Governor Uzodimma reminded the Acting Chief Judge that her office is not just a rallying point for all judicial officers, but one that synergises proceedings and justice delivery of the State.

He therefore admonished the Acting Chief Judge to be a shining light for members of the Bench and Bar and work assiduously not to disappoint the confidence reposed in her.

The Governor also emphasized that it is part of his government’s resolve to “fine tune and strategically position the judiciary as the third arm of government.”

To that effect, he noted that Hon. Chikeka’s appointment was purely on merit, devoid of bickering and rancour, noting that “the entire exercise that produced the Acting Chief Judge went through due process.”

Explaining that the Shared Prosperity Government is a defender of the Constitution, the Governor requested the Acting Chief Judge to always work in tandem with his administration to uphold the Constitution of the Federal Republic of Nigeria in the discharge of her duties.

Governor Uzodimma also reiterated that he has a lot of respect for the judiciary, insisting that to the best of his understanding and knowledge, “that arm of government has shown itself as outstanding and worthy of being respected.”

He further advised the Acting Chief Judge to exhibit the sterling qualities she is made of in the exalted office she has come to occupy by being “fair and firm in the discharge of her duties.”

More importantly, the Governor requested her and her team to always ensure speedy dispensation of justice, more so, with the precarious situation Imo State has found itself in today. “There is every need to ensure that judicial processes and justice administration is speedily carried out.”

In her acceptance speech, Hon. Justice Chikeka promised to uphold the oath of office she took by discharging her duties “without fear or favour, affection or ill-will.”

She thanked God Almighty for her appointment, the Governor for the confidence reposed in her by finding her worthy for the appointment.

She then assured the Governor and her audience that her tenure will witness a stronger and virile judiciary in Imo State.

Present at the swearing-in ceremony were the Deputy Governor of Imo State, Prof. Placid Njoku, the Speaker, Imo State House of Assembly, Rt. Hon. Paul Emeziem, his deputy, Rt. Hon Amara Iwuanyanwu , members of the House of Assembly, the immediate past Acting Chief Judge of Imo State, Hon. Justice Ijeoma Agugua, the immediate past Chairman of the All Progressive Congress (APC), Chief Marcellinus Nlemigbo and other senior members of the State’s judiciary.

Others included the Secretary to the Government of Imo State, Chief Cosmas Iwu, the Chief of Staff, Barr. Nnamdi Anyaehie, the Attorney General and Commissioner for Justice, Chief COC Akaolisa and other members of the State expanded executives.