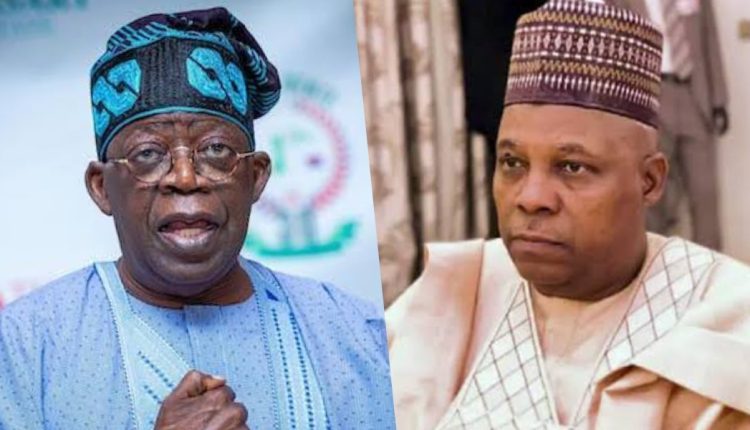 When the All Progressives Congress [APC] Candidate, Asiwaju Bola Tinubu first muted the idea of a Muslim running mate, many people thought the plan was only a ploy to test the murky political weather and the reactions of Nigerians.

Until Asiwaju announced former Borno State Governor, Alhaji Kashim Shettima last month, many Nigerians did not believe that the APC will endorse its presidential flag-bearer’s proposal for a Muslim-Muslim ticket considering the odds and social variables that are stacked against the party. Observers of the unfolding drama did not believe that the APC can afford to trade or gamble with a sensitive issue like religion and the risk of defeat. As it happened however, Bola Tinubu’s mind was already made-up on the matter and the rest has become history.

The presidential candidate of the ruling All Progressives Congress (APC), first named Kashim Shettima as his running mate while on a visit to President Muhammadu Buhari in Daura, Katsina State during the Eid-el-Kabir holidays.

The argument for and against Asiwaju’s decision has continued to rage like wild fire and the debate has further divided Nigerians, who are already thorn along religious and tribal lines, especially as some sections of the public consider the choice as a blatant disregard of the interests and feelings of the nation’s Christian community.

The decision has not gone down well even among APC members but despite protests and threats from various groups, Asiwaju organised a public presentation in Abuja, came on stage with some clergymen, ostensibly to douse tension and persuade protesting Christians to accept the obnoxious proposal. The presence of the clerics deepened further the raging controversy and the Christian Association of Nigeria [CAN], has since disowned the clerics forcing MURIC, a Muslim group, to join the fray by attacking CAN over its action.

APC Northern Christians and their followers have also organised a summit on the state of the nation and all the speakers at the forum, including the former Speaker of the House of Representatives, Right Honourable Yakubu Dogara vehemently rejected the Muslim-Muslim ticket and called on Asiwaju to revisit his decision in the interest of peace and unity. Dogara advised politicians to unite Nigerians and handle our diversity better rather than focusing on winning elections at all costs. According to Dogara, Nigeria needs to manage its diversity well by making politics and governance more inclusive and more representative.

He described the Muslim-Muslim ticket as a great mistake on the part of the APC stressing that the decision will fuel inequality, generate greater conflicts and breed wider division among Nigerians especially now that the nation has been battling insecurity, kidnapping, suffering, hunger, bad economic management among many other challenges adding, “Nigeria, with its various diversities cannot survive if we only tolerate one another.”

The Muslim/Muslim ticket has continued to generate outrage from many quarters. Even within the ruling party, there are feelings of anger that despite widespread opposition to the idea, Tinubu went ahead and chose Shettima as his running mate shortly after a stand-in [Alhaji Ibrahim Masari], who held the running mate slot to meet INEC deadline, announced his withdrawal from the position.

While dissecting the choice, proponents of the decision have argued that late Chief MKO Abiola, a Muslim, overwhelmingly won votes across the country with a fellow Muslim as a running mate. Analysts however posited that the proponents of a Muslim-Muslim ticket forgot that the situation in the country during Abiola’s time was quite different from what prevails today.

Some politicians behave like die-hard skeptics, who are often blind to reality. This is why many of them do not want to accept the fact that the situation in the country today has grown very dicey. Like a raging fire which moves from bad to worse, the mood of the nation has moved from complacency to understandable anxiety over the actions and policies of the ruling APC and its seeming inability to tackle insecurity, poverty, unemployment, promote national unity and the general welfare of the people.

Dispassionate observers do not need soothsayers to agree that Nigerians are today more divided on ethnic and religious lines than we were before, during and after the botched June 12, 1993 elections and a Muslim-Muslim ticket may turn out to be a joke carried too far and a very dangerous gamble.

Late MKO Abiola, who was the Presidential Candidate of the Social Democratic Party [SDP], had many things that worked in his favour during the general elections. Abiola came out to Nigerians then as a detribalised politician, who attended Christian public engagements when invited and made valueable contributions to the advancement of Christianity even as a Muslim. He also made several friends across the six geo-political zones many years before expressing interest in the presidential race.

The same thing cannot be said about Asiwaju Bola Tinubu or Alhaji Shettima, his running mate, who has been enmeshed in several controversies, including the allegation that he once fraternised with the dreaded Boko Haram Terrorist group, which occupied about ten local government areas during his tenure as Governor of Borno State. Although he has since denied the allegation, the suspicion and fear generated by the accusation in the minds of Nigerians still lingers.

The social media is already awash with allegations that the APC plans to Islamise Nigeria and some  members of the party have not helped matters by urging northerners to vote enmass for the All Progressives Congress in the 2023 general elections. Some are even wondering whether the APC flag-bearer is acting under the influence of foreign interests who want to divide Nigeria for unknown motives.

Newly elected President of the Christian Association of Nigeria [CAN], Archbishop Daniel Okoh, who spoke on this matter, said that many Christians feel genuine fear about ongoing deliberate plan to remove the Christian faith from national calculation and make Christians second-class citizens in Nigeria.

He stated that recent actions lead to that conclusion and also remarked that the fear was borne out of the recent insensitive actions of politicians in the polity and condemned “The same-faith ticket in one of the major political parties in Nigeria despite the caution raised by CAN since two years ago.”

Okoh made the remarks while delivering his acceptance speech in Abuja after the General Assembly of CAN validated his election.

Archbishop Okoh said: “We are coming in at the time that all of us in the Christian faith believe that some sections of political leaders are not sensitive to the diverse nature of our population when certain decisions are being made.

“Whatever happens, no matter how many times our sensibilities are insulted, we must resolve to make a positive impact on the political, economic and social systems of our dear nation.”

Okoh urged President Muhammadu Buhari to end the bloodletting, kidnapping and general insecurity in the country and also advised the president to do more in combating terrorism and banditry.

There are fears that the Bola Tinubu camp plans to deploy millions of Naira, like it happened during the national convention and in Ekiti State to buy up the votes of reluctant Nigerians, who have grown weary of the misrule experienced in the past seven years in the country.

How the 2023 election will play out is a matter of conjecture as the two major political parties have their weak as well as their selling points.  An incumbent administration can use every state resource, including the large security apparatus at its disposal, to influence a national election in its favour but  average Nigerians are looking up to the opposition parties to do whatever is legal and essential to save the nation and the people from the grip of the prevailing confusion, fear, poverty and the suffering in the land.

In conclusion, barring any form of rigging and massive trading in votes, it will be an uphill task for the APC to emerge victorious in 2023 without the votes of Christians in a free and fair general election judging from the mood of the nation. The need for Nigerian Christians to build formidable unity and face the election as a united front has never been as paramount as it is now. The PDP and other parties must also unite and work hard to break the influence of the ruling party in the far northern areas such as Borno, Yobe, Kebbi, Katsina, Zamfara, Gombe, Adamawa and Kano states where the APC hopes to gather its majority votes.

What I will do if war breaks out in Nigeria – Obi