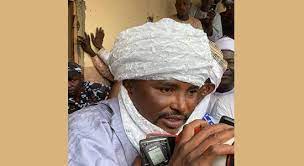 The news of the recent turbaning of a banditry kingpin  Ado Alero as Sarkin Fulani by the Emir of  Birnin ‘Yandoto in Tsafe Local Government Area of Zamfara State, Alhaji AliyuMarafa is absurd and condemnable considering the collateral  damage in both human lives, property as well as economic stagnation suffered by Nigeria in her protracted war against terrorism in the country.

Although we commend the courage and swiftness demonstrated by Governor Bello Matawalle of Zamfara State in ordering the immediate suspension of the Emir and the composition of a panel to investigate the circumstances leading to the insensitive decoration of a self proclaimed bandit as Sarkin Fulani, we challenge the state government to go the whole hug in meting out stiff punishment including but not limited to the banishment of all the characters involved in outrageous act which is tantamount to abuse of office and betrayal of the people.

Sadly, we recall that the notorious bandit leader, Ado Elero who is still on the wanted list of Katsina State Police Command is also allegedly linked to the killing of over 100 residents and the  maiming of scores of others spread across communities in the State.

Therefore, for the Emir to have rewarded him with a chieftaincy title for allegedly facilitating “a peace process” locally arranged between the Emirate and bandits terrorizing Tsafe Local Government Area despite Elero’s crimes against humanity is akin to glorifying, emboldening and enthroning act of terrorism where terrorists are offered incentives in a manner that will encourage local heroes to metamorphose into war lords. This is much similar to war situation where bandits take over territories by using women and resources of their conquered communities as spoils of war with which they throw as bait in recruiting more members into their folds.

It is rather unfortunate that some of the custodians of traditional institutions and related authorities have continued to misbehave in manners which tend to suggest that they lack proper understanding of the enormity of the current security challenges confronting the country to the extent that many of them have been found to be shielding, promoting and indeed benefiting from the criminal activities of bandits, kidnappers, insurgents and other enemies of the state.

It is for such brazen support for criminals that we blame the present administration of President Muhammadu Buhari for the  penchant of looking the other way in the face of over whelming evidence against the alleged sponsors of acts of terrorism against the Nigerian state. For as long as there are no serious consequences such that was demonstrated by Zamfara state government against the likes of Emir of  Birnin ‘Yandoto,  Alhaji  Aliyu Marafa, the tendency is that miscreants and bandits in the mould of   Ado Alero will continue to progress in criminality in their continued quest to holding the nation hostage”

The gross misconduct of the Emir in conferring chieftaincy title on a wanted bandit which is not too far from the kid’s glove with which the Federal Government have continued to treat terrorists to the worrisome point that some of the bandits now collect taxes and exercise sundry controls over such ‘conquered’ communities  including that of the Zamfara monarch himself.

It is on record that Buhari who ascended the highest office in the land on the mantra of restoring security of lives and property in the country, a total war on corruption and the rejuvenation of the nation’s economy now appears flat footed and obviously contented that his administration is still far from fulfilling these promises with about ten months to the end of his eight-year social contract with the citizens.

There is no evidence that the Buhari administration had secured a single conviction of any of the alleged terror groups and individuals even where foreign countries such the United Arab Emirate have been gracious enough to avail Nigeria of list of sponsors and war lords. The recent revelation of the escape of terror suspects from Kuje Correction Centre in the Federal Capital Territory held in custody with neither trials nor conviction speaks to the perceived sabotage of the administration against its citizens.

We believe that it is not enough for the government to design and develop various templates and strategies for responding to incessant attacks on citizens by terrorists, displacements from their ancestral homes, denial of sources of livelihood as it is in the case of farmers who can no longer access their farmlands and the unprovoked killing of helpless and  harmless Nigerians.

In our view, what is urgently required now is a courageous political will on the part of federal government to bring bandits and sundry terrorists to book within the confines of subsisting laws if only to serve as deterrent and face saving parting gift from the seemingly poorly performing Buhari administration to the millions of Nigerians who had erroneously assumed in 2015 that the All Progressives Congress (APC) party had the ways and means of making life better for them.

It is not for want of evidence that most Nigerians have remained consistent in questioning the sincerity of purpose of governance  when the leaders  have taken pride in flaunting ignorance amidst naivety of the myriads of problems bedeviling the society as is the case of the recent directive by Mr. President to the Minister of Education to investigate, resolve  and report back to him within three weeks all issues bordering of the over five-month strike embarked upon by the Academic Staff Union of Universities (ASSU) when ordinarily he should have ordered the immediate sack of all top government officials handling the crisis for negligent of duties.