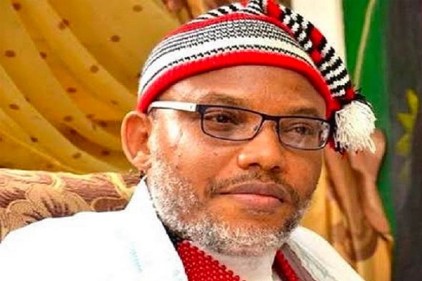 …And Comply With UN Directives Without Further Delay!

President Muhammadu Buhari should, without further delay, order the immediate and unconditional release of the detained leader of the Indigenous people of Biafra (Ipob), Mazi Nnamdi Kanu, who is currently standing trial over treasonable felony.

It has become very pertinent, even compelling, to release Mazi Nnamdi Kanu now without further delay, because of the fast deteriorating security situations in the country. Abuja is no longer safe. Nowhere is safe anymore. Nigeria is under siege.

Real terrorists, branded as  bandits and kidnappers, have virtually taken over.

Those who incubated and enabled these monsters kept living in denial and lying to us. They kept telling us that these armed insurgents have been “technically degraded.”

Unknown to us, it was our once vibrant, efficient and highly professional Nigerian Armed forces that were actually “technically degraded and neutralized.”

O! Nigeria, how is the Mighty fallen!

The President Muhammadu Buhari led government kept having the obsession that its main problem is the non-violent agitations of self determining groups in the country.

Rather than exploring dialogue as a veritable means of conflict resolution in a democratic order, the government resorts to a brigand-like approach of suppressing every descent and divergent opinion. How far can you really go to ride roughshod over people and rule them without their consent? This is at the root of various agitations in the country.

The international Community recognizes the Indigenous People of Biafra (Ipob), led by the detained Mazi Nnamdi Kanu, as a non-violent secessionist group pursuing self-determination efforts of its people in accordance with the relevant Charters of the United Nations. But the Nigerian government kept insisting that Ipob was a terror group and has classified it so by outlawing its activity.

The United Nations (UN) is an international organization, founded in 1945. It is saddled with the task of maintaining international peace and security, develop friendships among nations, achieve international cooperation, and be a center for harmonizing the actions of nations. And it has various agencies through which it seeks to achieve these laudable objectives. Nigeria is a very prominent member of the apex world body, and subscribes to its various conventions and covenants.

Pursuant to its mandate of “harmonizing actions of nations”, the UN Working Group on Arbitrary Detention and Human Rights Council waded into the matter of the detained leader of Ipob, Mazi Nnamdi Kanu,and has come out with a damning report!

The UN Working Group took serious exception to the circumstances of the arrest, detention, torture and extraordinary rendition of Mazi Nnamdi Kanu in Kenya in 2021 and his extradition, trial and current detention at the DSS facility in Abuja, Nigeria.

The Group held that the actions of the Governments of Kenya and Nigeria in the Nnamdi Kanu’s saga was not only reprehensible, but also a violation of laid UN Charter. Nnamdi Kanu, in the opinion of the Group, is a victim of State persecution!

Accordingly, the World Body has directed that the detained leader of the indigenous people of Biafria, Mazi Nnamdi Kanu, be released immediately and unconditionally by the Nigerian Government.

To underscore the seriousness of the illegality committed by the Governments of Kenya and Nigeria against Mazi Nnamdi Kanu, the UN group demanded that Mazi Nnamdi Kanu be paid adequate compensation by the Nigeria government for infringing upon his fundamental human rights and the trial of all those responsible for the violations by both the Kenyan and the Nigerian Governments.

Furthermore, the UN Group gave Nigeria six (6) months ultimatum within which to comply with this directive.

Specifically, it requested feedback action on steps  taken to implement its recommendations, amongst which include:

(1) Whether Mazi Nnamdi Kanu has been released and, if so, on what date;

(2) Whether compensation or other reparations have been made to him;

(3) Whether an investigation has been conducted into the violation of his rights and, if so, the outcome of the investigation;

(4) Whether any other action has been taken to implement the present opinion; etc.

The Nigeria government cannot afford to treat these recommendations with levity.  Time of obstinacy is fast gone.

What moral justification will the Federal Government have to continue to try Nnamdi Kanu when the government itself has given the international Community the impression that is a rogue nation which can hardly observe international laws?

Besides, it is now clear that terrorists and bandits incubated and treated with kids gloves by the same government, which have virtually taken over Nigeria, are the real enemy of Nigeria, and NOT Mazi Nnamdi Kanu and his Ipob members.

Nnamdi Kanu is not the main problem of Nigeria.

His continued trial has become a travesty and, therefore, unsustainable. It should be discontinued forthwith and the UN Body’s recommendations fully complied with.

The earlier the government releases him, the better; to avoid stories that touch the heart later!

Elections are not Magic Shows

Elections are not Magic Shows