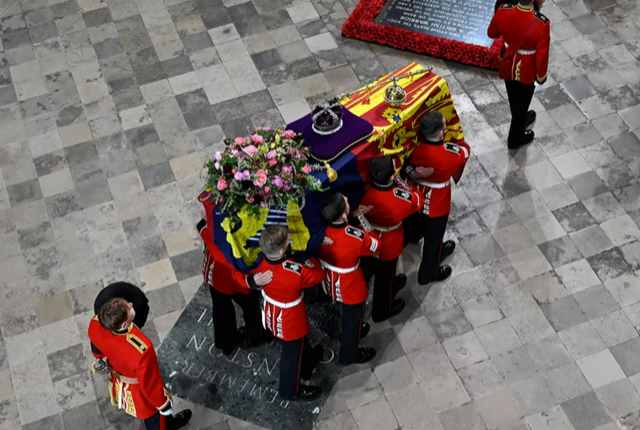 The Queen’s coffin has been lowered into the Royal Vault of St George’s Chapel on Monday.

As the coffin was lowered, the Dean of Windsor recited Psalm 103, which includes the traditional line: “Go forth upon thy journey from this world, O Christian soul.’’

He also offered the commendation a prayer in which the deceased is entrusted to God’s mercy.

The service ended with the Sovereign Piper playing the lament “A Salute to the Royal Fendersmith’’ from the doorway between the chapel and the dean’s cloister, with the music gradually fading away as he walked towards the deanery.

The Archbishop of Canterbury then concluded the service with a blessing before the congregation sang the national anthem.

Senior royals, including King Charles III, were at Westminster Hall for the funeral service and have now accompanied the monarch’s coffin in a cortege to her final resting place beside her husband, Prince Philip at Windsor castle.

Also, world leaders such as Nigeria’s Vice President Yemi Osinbajo, Prime Minister of Canada, Justin Trudeau; USA President Joe Biden and France President, Emmanuel Macron, and other royals and Heads of State and Governments across the world are at Westminster Hall to witness the funeral of the late British monarch.Here are photos from Queen Elizabeth’s funeral service.

Imo  House of Assembly gets new  Speaker  as Ibe resigns