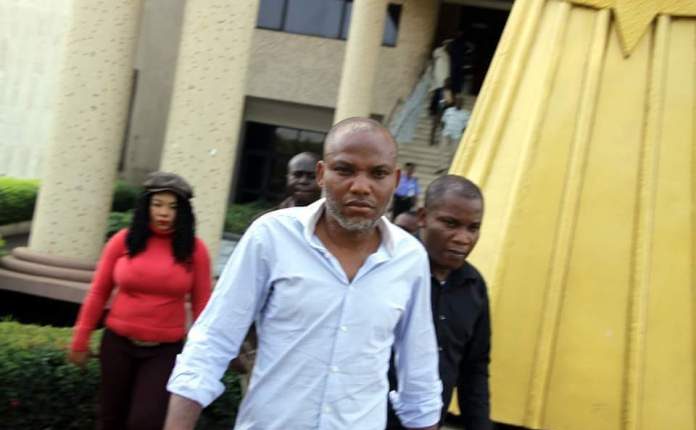 The Attorney-General of the Federation and Minister of Justice, Mr Abubakar Malami (SAN), said on Friday in Abuja that a presidential panel has indicted Nnamdi Kanu for instigating subversive campaigns against the Nigerian state.

Kanu, leader of the proscribed Indigenous People of Biafra, IPOB, is currently being prosecuted at the Federal High Court Abuja by the federal government for alleged  treason and terrorism.

Malami, while briefing newsmen, said that the eventual re-arrest of Kanu in June, and some members of his group led to the inauguration of a Presidential Ad-hoc Committee comprising 24 members from the Ministry of Justice and the Ministry of Information among other.

He said that the committee, after investigations, released it’s report titled: “Investigation report on acts of terrorism and allied offences perpetrated by Nnamdi Kanu, and report on the sponsors and financiers of Sunday Igboho and associates.”

According to him, the committee, headed by him, made a number of findings including that Kanu instigated wild spread violence in different parts of the country.

“The committee finds as a fact, that consequent upon the instigating directives of Nnamdi Kanu, members of IPOB/ESN carried out massive attacks on democratic institutions especially INEC facilities with a view to hampering democratic process in Nigeria.

“That acting on the instigating directives of Nnamdi Kanu, IPOB members and #EndSARS protesters attacked and killed many security agents, destroyed several public and private properties, including Police stations, public transport buses and other facilities across the country.

“This directive was carried out and several security personnel (especially Police Officers) were killed and public and private properties destroyed,” Malami said.

The minister also said that the federal government had received the report on financiers of Sunday Adeyemo (a.k.a Sunday Igboho).

“The report revealed that Igboho is a director and signatory to Adesun International Concept Limited registered on April 23, 2010.

“Igboho is linked to 43 bank accounts in 9 banks.”

According to Malami, the major financier of the fugitive and separatists was found to be a federal lawmaker in the National Assembly.

“A total sum of N127 million was received by Igboho from his financiers between Oct. 23, 2013 and Sept. 28, 2020 through Adesun International Concept Ltd accounts.

“It might be recalled that Abbal Bako & Sons and its promoter Abdullahi Umar Usman are suspects in the on-going Joint Terrorist Financing Investigation.

“Abdullahi Umar Usman is by way of financial transaction connected to Surajo Muhammad (who was sentenced to life imprisonment in UAE on charges of financing terrorism (Boko Haram),” Malami said.

The minister explained that the report showed the nexus between separatists’ agitation, terrorism financing and disruptions of peace in the country.

“The report found connections of financial transaction between Adesun International Concept Ltd (belonging to Igboho) and some construction companies and businesses among others.”

Malami, however, assured that the federal government remained resolute in its determination to have a peaceful Nigeria.

He said the government would  do all that was necessary within the context of the legal provisions in ensuring that the matter was given the deserved attention and those found guilty would be made to face the wrath of the law.