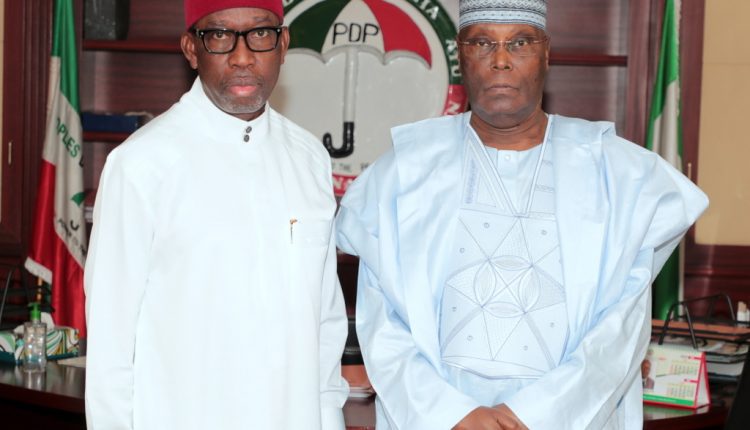 The duo who have been having a running battle since the Peoples Democratic Party (PDP) presidential primary met at the house of Professor Jerry Gana on Thursday.

Atiku had defeated Wike in the Primary, but the Rivers’ governor had indicated interest in being the presidential running mate, but the former VP settled for Governor Ifeanyi Okowa of Delta State.

This had worsened PDP crisis as Wike fraternizes with leaders of the All Progressives Congress (APC).

However, the PDP BoT met over the issue between Atiku and Wike and resolved to reconcile both men.

After the Wednesday meeting of the BoT, Senator Abdul Ningi, acting secretary of the committee, told journalists that the members of the board would resolve the impasse and enable the party to present a common front during the coming elections.

At Thursday’s meeting, which lasted for over an hour, the politicians agreed to set aside their differences and work together, Daily Trust reported citing a source.   The source said they agreed that a small committee would be set up to look into areas where the camps of Wike and Atiku can work together.

The committee would then report to the panel that the BoT set up to resolve the crisis.

Malaye is a politician and a member of the 8th Senate, who represented Kogi West Senatorial district. He hails from Ayetoro Gbede in Ijumu Local Government Area of Kogi State

Bwala, on the other hand, is a legal practitioner, politician and public affairs analyst. He hails from Borno State.