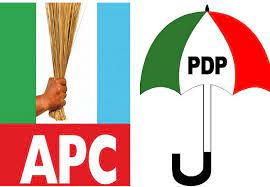 Blessing Akorowosi, Osogbo
The All Progressives Congress (APC) in Osun State has raised alarm over suspected tampering of the July 16 governorship election results and Bimodal Voter Accreditation System (BVAS) reports in the state.
The APC alleged that officials of the Independent National Electoral Commission (INEC) and members of the Peoples Democratic Party (PDP) are making efforts to manipulate the electoral documents after the submission of its petition before the Election Petition Tribunal.

The State Governor, Adegboyega Oyetola and his party, had on Friday, August 5 filed a case containing allegations of non-compliance with the Electoral Act, 2022 and inconsistencies between the numbers of persons accredited by BVAS and the actual numbers of persons that voted in each polling unit.
The petitioners pointed out over-voting in 749 polling units across ten local government areas of Ede North, Ede South, Egbedore, Ejigbo, Ila, Ilesha West, Irepodun, Obokun, Olorunda and Osogbo Local Government Council Areas.
In a statement by the State Chairman of APC, Prince Gboyega Famodun on Wednesday, officials of INEC office, Osogbo and PDP members were warned to desist from any criminal activity capable of compromising fairness and justice.
“The leadership of the All Progressives Congress (APC), Osun State Chapter, has received an authentic information about the activities of certain individuals in the Osun State office of the Independent National Electoral Commission (INEC) and some members in the Peoples  Democratic Party (PDP) in attempts to compromise the contents of the electoral results of Forms EC8A and EC8B vis-à-vis the Bimodal Voter Accreditation System (BVAS) reports which contain the records of the actual number of persons accredited to vote in each polling unit.
“It is on record that the certified true copies of most documents are with us and any attempt to doctor, manipulate, tamper with or utter such documents in the custody of INEC shall be resisted strongly.
“We use this medium to call on all lovers of democracy and electoral justice to prevail on INEC and PDP to allow a peaceful determination of the electoral dispute as submitted to the Electoral Tribunal sitting in Osogbo.
“If the PDP and the INEC know that they won the election fair and square without any malpractice or corrupt practice, they should come and defend our allegations without deceiving the public or making electoral justice impossible.
“We shall not hesitate to put in motion criminal prosecution against any attempt to defeat the ends of justice,” Famodun stated.