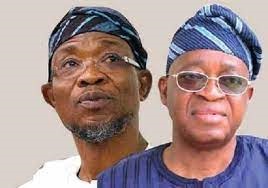 … ‘You’re not the Alpha and Omega of Osun progressive politics, nothing’ll stop Oyetola’s reelection’ Famodun tells Aregbesola
… Famodun’s outburst’s confirms his incompetence, failure– TOP
Blessing Akorowosi, Osogbo
The Osun State All Progressives Congress Chairman-elect, Prince Gboyega Famodun has reacted to the declaration of the Minister of Interior, Mr Rauf Aregbesola that he belongs to The Osun Progressives(TOP) caucus.
Famodun stated in a press statement, that Aregbesola should remove the thought and notion of being the Alpha and Omega of Osun State progressive politics, noting that he is only grandstanding in the glory of the past.
He stressed that Osun APC is too strong for Aregbesola to break, describing him as an arrogant, selfish, wicked politician.
Famodun further said that Governor Oyetola is unstoppable and that nothing will hinder his second term bid.
“His recent statement in Ilesa reduces his status as a former governor and as a serving minister of a party he claimed to belong.
“Aregbesola is an arrogant, selfish, self-centered, reckless, wicked and inconsiderate politician who wants the whole world to be his possession.
“It is not an overstatement to categorise Aregbesola as someone who prefers to rule in hell than to serve in paradise.
“Aregbesola should be told that there is no amount of intrigues by him that is capable of bungling the second term ambition of Governor Oyetola as it has divine guidance and pathfinder which makes him(the governor) unstoppable by any mortal”, Famodun said.
Responding to Famodun’s reaction, the Publicity Secretary of Aregbesola’s group, Com. Abiodun Agboola described Famodun as a failed party administrator and harbinger of misfortune into the party, adding that that his “incompetence, gluttonous attitude and hypocrisy brought the Osun APC to where it is today.”
In his statement issued, “The minister admitted that the party is divided and added that work was ongoing to reunite the party members.
“It is a fact that Famodun was unable to administer the APC for seven years which degeneration was brought to the fore by The Osun Progressives (TOP) which Famodun and company attempted to play down but was established by the minister.
“Famodun’s invective poured out in his personally signed press release signed post further his incompetence in human management which The Osun Progressives had profoundly spoken about. No rational chairman will employ gutter languages he used on the Minister who was once his breadwinner as governor.
“Famodun is reaping bountifully from the crisis, hence will never want it end. Whatever manner peace is proposed, Famodun’s headship of the party is inconceivable.”
Continue Reading
Osun APC: FamodunTOP caucus bicker over Aregbesola's declaration
92
Share FacebookTwitterWhatsAppPinterestEmailFacebook MessengerLinkedinTelegram