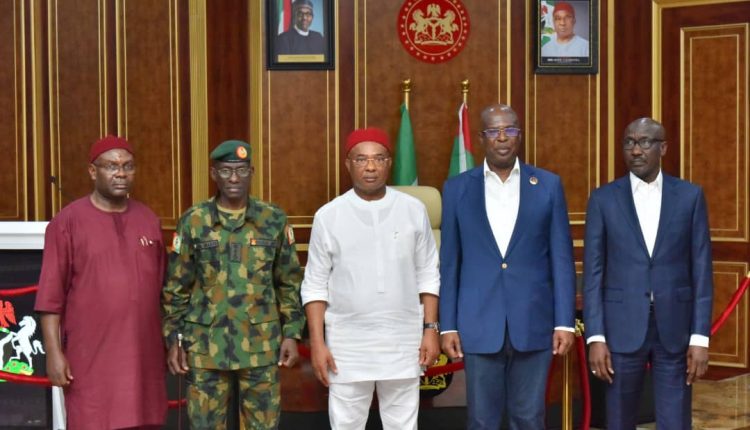 The Minister of State for Petroleum Resources, Timipre Sylva has lamented that “the problem of crude oil theft has reached a level of national emergency” and that “the situation cannot be handled in Abuja alone.”

This as the  federal government, security agencies, Nigeria National Petroleum Company (NNPC) Limited are partnering with Governor Hope Uzodimma and other oil producing State to ensure that the fight against pipeline vandalism and oil theft in the State is contained.

The Minister said:  “It is a national emergency because the theft has grown wings and has reached a very bad crescendo. This is because the thefts are taking place in the Communities that host the oil pipelines and as a result, it has become necessary to involve the Stakeholders, especially the host Communities.”

“And because of the height and the orchestrated nature of oil theft Nigeria could not take the advantage and opportunities that are bound in the gas production because no investor would want to invest where there is incessant insecurity and vandalism of the infrastructure.”

He therefore canvassed the need to come together, and collaborate to solve the problem “and avoid the problem killing us as a Country.” He added: “And to achieve the above there is the need to involve the State Government and the people at the grassroot.”

He thanked the Governor for putting a lot of efforts to ensure that Imo is safe and the economy is not closed down.

“The sit-at-home is not working in Imo State as against the thinking out there.”

In his remarks  Governor Uzodimma described the consequences of crude oil theft as ‘’very alarming and too much to be tolerated.’’

He noted that the problem has not only led to the drop in earnings for the government but has also created environmental pollution and other health hazards.

The meeting is part of industrial wide intervention to curb crude oil theft in Nigeria. It afforded the Governor the opportunity to host a high powered delegation comprising the Minister of State for Petroleum Resources, Chief Timipre Sylva, the Minister of State Education,  Rt. Hon. Goodluck Nana Opiah, the Chief of Defence Staff, General Lucky Irabor and the Group MD/CEO NNPC Limited, Mele Kyari and other stakeholders of Imo State that include traditional rulers and representatives of Producing Community.

The Governor expressed worries by Stakeholders over banditry and oil theft in the South East and Imo State in particular and thanked the Armed Forces for their concerted efforts in the fight against the crime in the past years.

While welcoming them to Imo State, the Governor described the visit as a very important one “meant to discuss national issues bordering on national security, economy, national peace, and unity of Nigeria.”

He acknowledged that two years ago, oil production in Imo State and in most places where oil theft was a business, was almost at a bottom level and commended security agencies for their dexterity and efforts in the fight that has brought the production back to near normal.

He canvassed the need to cooperate with the oil companies and the management to enjoy the rich natural resources endowed to the States that produce oil.

On the suggestion to engage private security contractors, the Governor described the idea as ‘’a delicate one,’’ noting that “for such to take place the Nigeria Security Agencies must take interest and profile the security contractors to ascertain their genuiness before engaging them.”

He emphasized that those to be engaged “must know the geography, the policies and programmes and the workings in the places they are to operate before engaging them to avoid engaging some of the thieves as security contractors.”

Governor Uzodimma added: “Crude oil theft is run by a cabal and a cartel that are ready always to resist the security agencies. This, in other words, informs that the oil thefts and pipeline vandals are sophisticated in their operations, which means there is the need for a strong support to the Armed Forces and other Para-Military Agencies that are involved in the protection of the Nigerian oil economy.”

Emphasizing the need and essence of the stakeholders discussion and its benefits, the Governor said that “it has come to a point where all hands must be on deck to save Nigeria, save the economy, create job, discourage banditry and the pollution of our environment and the water resources.”

He called for the need to strengthen the environmental laws to save our environment and our society from extinction.

Governor Uzodimma promised that Imo State Government will do her best to support and work with the Federal Government, the Army and Oil Producing Companies to achieve the fight against the hydra-headed monster of pipeline vandalism and crude oil theft.

He also thanked the NNPC for the 200 bed hospital the company is building at the Imo State University Teaching Hospital (IMSUT), Orlu and prayed them to speed up the project with the target of commissioning it soonest.

Adding his voice,  the Chief of Defence Staff, General Lucky Irabor, appreciated the Governor for his efforts in supporting the Armed Forces towards contending the escalated actions against all criminality along the oil producing areas in South East.

He called on the State Government, the Stakeholders and the Communities to “be involved in the fight against oil theft to a reasonable percentage and leave the rest for the Armed Forces,” assuring that “the Armed Forces are always available to receive further support to fight banditry and all other forms of criminality in Nigeria and Imo State in particular.”

Meanwhile, Governor Ifeanyi Okowa of Delta has advocated a review of surveillance contracts on oil facilities to involve host communities in order to check the high rate of oil theft in the country.

He said that reviewing oil surveillance contracts based on performance of the contractors and engagement of host communities would ensure effectiveness in securing the nation’s oil and gas assets.

Okowa made the call when he received a Federal Government delegation on anti-Oil theft led by the Minister of State for Petroleum Resources, Chief Timipre Sylva, on Monday at Government House, Asaba.

He admitted that the challenge of oil-theft was huge, given the level it had assumed, but expressed happiness with the steps being taken by the authorities to curb the menace.

“I am glad that we are discussing this hydra-headed issue which impacts directly on our economy and the environment.

“It impacts on the health of the people and sustainability of the environment and I am glad that we are taking some steps because there are so many issues that led us to this.

“We went through situations where gaps where created between host communities and oil companies, and unfortunately criminality set in.

“It has gone so bad but we are doing our best as a state. I am also glad about this collaboration,’’ he said and stressed the pertinence of a review of surveillance contracts of the oil facilities to ensure community involvement.

The governor pointed out that it was often difficult to secure the facilities, especially when the persons given the contracts did not have adequate information on the environment or not have the buy-in of host communities.

“We know that the impact of the nefarious activities on the health of the people cannot be immediately ascertained, and this collaboration is, therefore, very imperative.

“Any measure that will deliberately reduce the level of oil thefts is definitely worth supporting, and as a state government, we pledge our continued support.

“The surveillance contracts should be tied to performance such that when there are oil thefts you terminate the contract and it is always good that communities are involved because they know the environment better,” he said.

Okowa flayed the oil companies for not keeping faith with their Memorandum of Understanding (MOUs), thereby making the stakeholders to lose confidence in the system.

He explained that when oil companies failed to sign or implement MOUs, “it becomes very difficult for the state government to mediate when there are issues.

“The security agencies must heighten their operations and they need to be resourced to enable them to also increase their level of surveillance and for this to succeed, there must be sincerity on the part of all stakeholders.”

Earlier, Sylva had told the governor that the team was in Asaba to seek the support and buy-in of the state government on measures to be adopted to check oil-theft, saying “as a country we cannot sustain this kind of theft perpetually’’.

He said that oil theft had become a national emergency, especially as the nation had not been able to meet its OPEC production quota.

“Our production has dropped drastically to very unsustainable levels; so, we have decided to take the bull by the horn by putting some structures in place and those structures cannot function effectively without the collaboration of the state government,” the minister said.

Chief of Defence Staff, General Lucky Irabor, who is coordinating the security intervention against oil theft, disclosed that in the last five months security agencies had been dealing with issues of illegal refineries and oil bunkering across the Niger Delta.

The CDS also advocated for the engagement of indigenes and host communities in the fight against the criminal activity.

On his part, Group Chief Executive Officer of NNPC Limited, Mallam Mele Kyari, said that Nigeria was currently losing about two billion dollars monthly to the activities of oil vandals, with its attendant effect on environmental degradation.

“This has done extensive damage to the environment and losing 1.9 billion dollars every month is colossal, considering the nature of the global economy at the moment,’’ he disclosed.

Kyari reinstated that the team needed the support and buy-in of Delta Government “because stopping this oil theft requires the concerted efforts of the Federal, State Governments, oil companies and security agencies”.