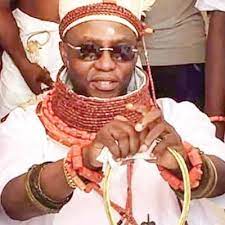 The Oba of Benin, HRM, Ewuare II, has ratified the suspension of Chief James Okponmwense Ezomo, the Ezomo of Benin kingdom.

This was contained in a statement signed by Mr. Frank Irabor Secretary, Benin Traditional Council and made available to newsmen in Benin.

According to the statement, the Ezomo of Benin kingdom was earlier suspended on 24th of January, 2022 by his group known as ‘UZAMA N’THINRON,’ headed by Chief Oliha of Benin before the ratification by His Royal Majesty.

The statement added that the Benin Chief was suspended due to his anti-palace activities.

The statement reads in part, “Chief James Okponmwense Ezomo, the Ezomo of Benin is therefore forbidden to exercise any authority over Uzebu community. This is as a

result of his anti-Palace activities.”

RE: WIKE, A GOVERNOR POSSESSED BY SPIRIT OF FLYOVERS