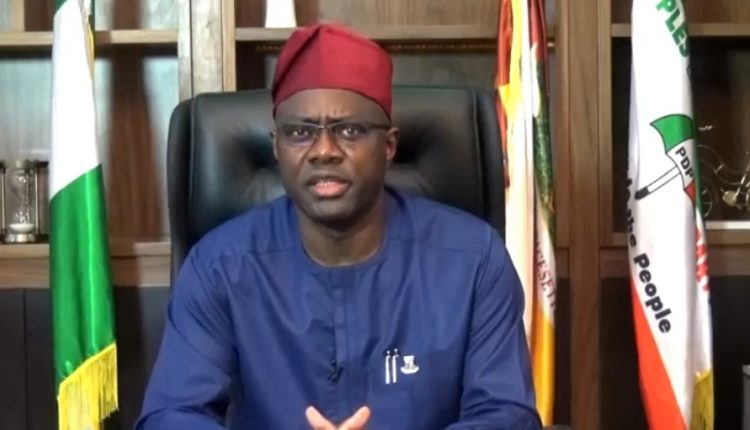 Oyo State Governor, ‘Seyi Makinde, declared on Wednesday that with a new leadership  that will soon take over the administration of the Peoples Democratic Party (PDP), he was hopeful that the party will begin to take actions that will show Nigerians that it is different and ready to work for Nigerians’ best interest.

A statement by the Chief Press Secretary to the governor, Mr. Taiwo Adisa, indicated that Governor Makinde, who chaired one of the sessions at the two-day retreat for newly-elected PDP Officers, held in Abuja, urged the party to end voter apathy by mobilising women and youths, who represent critical segments of the voting population.

According to the governor, the PDP must address the issue of voter apathy ahead of the 2023 general election, as the results of the 2015 and 2019 presidential elections showed that less than 30 million voters participated in each of the elections, whereas, the number of registered voters was just below 85 million.

He stated, however, that in order to address the issue of youth and women participation in politics, the party must deal with the issue of elective office holders breaching the trust and confidence of voters.

He said: “I would like you to bear in mind, each time the speakers mention youth, that Nigeria has a population of about 78 million persons who fall between the ages of 16 and 40 and when they say women, we should be thinking in terms of about 100 million persons.

“I have decided to lead with this information because as politicians, we are interested in numbers. The 2015 presidential election was won and lost with a voting population of less than 30 million. In 2019, the figures were similar – less than 30 million people voted. In both cases, the total number of registered voters was just below 85 million.

“From these numbers, we can clearly see that we have an election participation problem. “First, those eligible to register are not registering to vote. “Second, over 60 per cent of those who register, shun the elections.

“If we are being honest, we will agree that the failure of the political class to make itself relevant to the voting population is chiefly responsible for voter apathy. We over-promise and under deliver and the citizens pay the price.

“We have a growing population of poor Nigerians and the growing feeling among the youths is that their only hope for economic stability is to leave the country. Why then should they be interested in voting?

“If politicians at all levels make an impact in people’s lives, then they will be more interested in who occupies these positions and who wins the elections.

“So, the solution really begins with us – those of us in this room who are occupying elective positions. What are we doing with the trust we have been given?

“I am hopeful that with this new dispensation, new party leadership, we will begin to take actions that will show Nigerians that the PDP is different. We need the people to come out and vote, because as has been shown, elections are harder to rig when the people are interested and invested in the process.”

The governor added: “Let me leave you with this statistic. In September 2021, the Independent National Electoral Commission said that they had over 3 million new voter-registrations. Bringing the number of registered voters for the 2023 elections to just about 90 million. If women and youths alone are about 120 million, it tells us that we still have a lot of mobilising to do.

“I hope we see this as a wake-up call and begin now to do our part to end voter apathy.”

Meanwhile, Former Vice President of Nigeria, Alhaji Atiku Abubakar  has challenged the All Progressives Congress (APC) led states to emulate the infrastructural projects being executed by Governors from the Peoples Democratic Party,(PDP).

Atiku Abubakar who threw the challenge while performing the official commissioning ceremony of a 4.2kilometer Gombe road to Maiduguri bypass on Thursday, noted that by so doing the challenges of youth restiveness due to unemployment and insecurity in the country can be surmounted.

According to him, the Infrastructural projects executed by Governor Bala Mohammed of the state are now instruments of economic empowerment that is creating jobs for unemployed youths in the country.

He commended  Governor Bala Mohammed for delivering the dividends of democracy to the people of the state, urging him to sustain the momentum and accelerate the pace of good governance in the State.

According to him, “Let me commend you for reducing the unemployment in the state and the country at large because it is this unemployment wave that is creating all the social ills that we are facing in the country.I wish the federal government would copy what the PDP states are doing in this country because in every PDP state you go, you will find Infrastructural development projects taking place and I cannot recall any APC state commissioning projects”

“Therefore, your excellency, you are virtually laying the pathway to the return of PDP in the state and also the country at large.I want to commend your contributions in that regards.Let me also use this opportunity to commend the state house of Assembly, that inspite of the fact that the assembly is controlled by the opposition party, the development of the state is far more important to them than political beliefs”

He then appealed to the people of thei state to give the governor the needed support to move the state forward, notting that the infrastructure achievements recorded in Bauchi State was worthy of emulation even as he lauded the governor for the milestone recorded on road infrastructure within his over two years in office.

In his address,  Governor Bala Abdulkadir Mohammed  of Bauchi  state revealed that the commissioning of the Gombe Maiduguri By-pass road was a milestone in the history of bauchi state as the state government decided to immortalize the former Vice-President by naming the road after him.

According  to him, the Gombe Maiduguri bye pass road was named after  Atiku Abubakar in recognition of his contributions to the evolution to nascent democracy and as one of the founding fathers of the Peoples Democratic Party(PDP).

“When  my government came into inception in 2019, i made a lot of promises based on developmental road map, which i tagged “My Bauchi Project”, that laid out an ambitious plan to take Bauchi State out of the back waters of development to the front seat of human progress despite dwindling resources at all levels of government”, he said.

The Governor  added  that his administration did not take the confidence reposed on his government by the people for granted, pointing out that public office is the secular trust that should be held with a high sense of responsibility.

“For us, the equitable distribution of resources should be the corner stone of government business as a deliberate strategy, not only to deepen inclusion of stakeholder ownership of projects, but also to significantly reduce to the barest minimum the feelings of marginalization and exclusion that is a threat to national unity” .

The occasion was witnessed by members of the state executive council, State PDP officials, traditional rulers, state legislatures and former senators of the state.