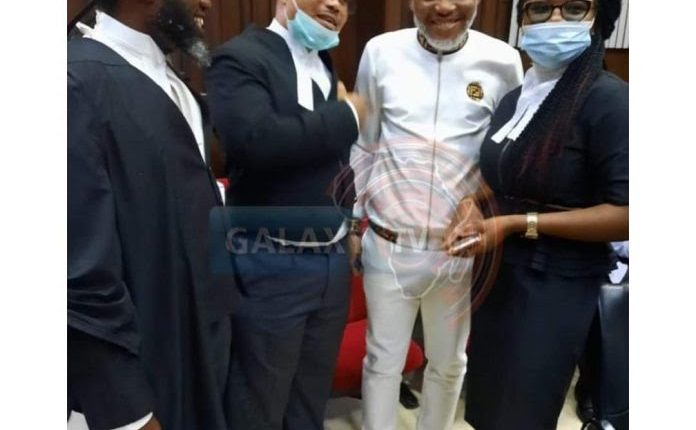 A Federal High Court, Abuja on Thursday fixed November 10 for hearing the application of leader of the proscribed Indigenous People of Biafra (IPOB), Nnamdi Kanu, challenging the competence of the charged preferred against him by the Federal Government.

Justice Binta Nyako fixed the date after the office of the Attorney-General of the Federation (AGF) filed a fresh seven-count charge against Kanu.

The judge also made an order that three people of Kanu’s choice should be allowed to visit him every Thursday.

However, Kanu’s plea to be transfered to Kuje Correctional Centre was rejected by the court.

Earlier, the DSS brought Kanu into the courtroom on the fifth floor of the high-rise building about 9:45am in company with heavily armed security agents.

The News Agency of Nigeria (NAN) reports that the Office of the Attorney-General of the Federation on Monday filed fresh charge against Kanu bordering on treasonable felony and acts of terrorism.

NAN also reports that there was pandemonium earlier at the main entrance of the building as lawyers clashed with the DSS operatives over refusal to allow them access into the court premises.

He had been granted bail in April 2017 for health reasons but jumped bail after flouting some of the conditions given to him by the court.

He later left Nigeria after soldiers raided his father’s residence in Abia state in November 2017.

IPOB was subsequently declared a terrorist group by the defence headquarters and court after the south-east governors proscribed it.

The Federal Government arrested and returned Kanu on June 20.

NAN reports that on June 28,Justice Binta Nyako gave the order that he be remanded in DSS custody

Meanwhile, three suspected members of Indigenous People of Biafra, IPOB, were killed by soldiers on guard at a branch of a first-generation bank in Arochukwu town, Arochukwu council area of Abia State.

Commissioner of Police, Abia State, Mrs Janet Agbede, said members of the group numbering about fifty had attacked the soldiers with guns and machetes.

In the ensuing gun duel, the soldiers overpowered the suspected IPOB members.

She explained that three of the IPOB members fled with bullet wounds as they bowed to the superior firepower of the soldiers.

In her words; “The soldiers made a counter-attack and three of the hoodlums were neutralized during the exchange of fire.

“The superior firing power of the soldiers made the hoodlums disperse. As of now, effort has been intensified to track down the fleeing hoodlums.”

The CP urged the public to report anyone seen with bullet wound to the nearest Police station or any law enforcement agent.