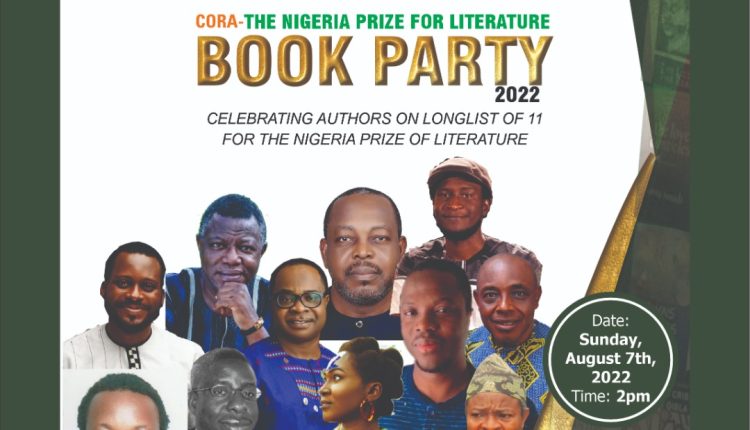 Committee for Relevant Art (CORA) in collaboration with Nigeria LNG, is set to hold the 13th edition of its Book Party for 11 writers on Sunday, August 7, 2022, at the Shell Hall, MUSON Centre, Onikan, Lagos.

The writers had been longlisted for the 2022 edition of the $100,000 Nigeria Prize for Literature.

According to a statement signed by Samuel Osaze, Programme Officer, CORA, the event will start at 2 pm and will be broadcast live on Zoom, YouTube, Facebook and Instagram for virtual guests to be able to participate in the programme.

According to the statement from the committee, the event “is a literary feast of Ideas and Life, to celebrate the authors and their works for emerging as some of the very best in the country.”

“It is an afternoon of literary feasting, featuring performances, wining and dining,” the statement added.

The 11 writers longlisted with their works include:

Memory and the Call of Water by Su’eddie Vershima Agema

The Lilt of the Rebel by Obari Gomba

Yawns and Belches by Joe Ushie

Your Crib, My Qibla by Saddiq Dzukogi

The CORA-The Nigeria Prize for Literature Book party, a special iteration of the CORA Book Party launched in 1996 — was initiated after a review of the first five years of the esteemed Prize project. The idea is to create a platform through which the public get to engage with the works considered the best of the usually over 200 entries per edition of the NPL.

CORA is a group of artistes, art enthusiasts, art promoters and art writers committed to the flowering of all the contemporary arts of the peoples that make up Nigeria.

The group has since 1999, organised annually, the Lagos Book & Art Festival, LABAF, critically described as “the biggest Culture picnic on the African continent.” The 23rd edition holds November 14-20 on the theme: “Pathways to the Future.”