Nigeria @ 62: Soludo describes past as more glorious than the present, says founding fathers will be turning in their grave 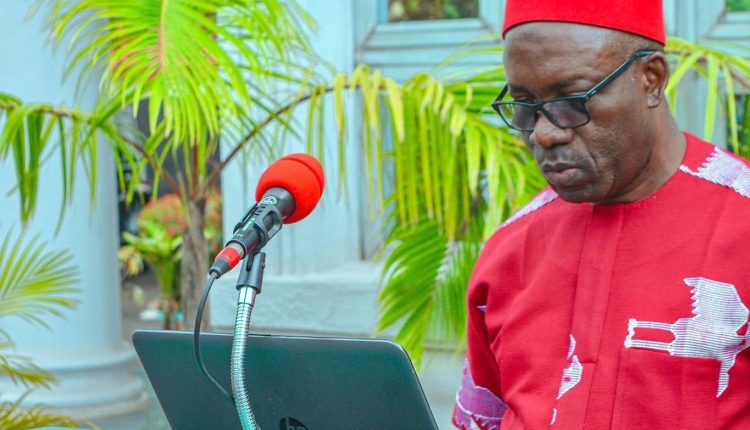 Anambra State Governor, Prof Chukwuma Soludo on the occasion of Nigeria’s 62nd year independence anniversary described the occasion as a  time for soul searching for people to rediscover the purpose of public service.

He said that though one might wonder what the country have to celebrate at 62years, that there is the accolade of  the most populous black nation on earth to cling unto.

Soludo who gave the speech at the Alex Ekwueme parade ground said, “We celebrate Nigeria with all its diversity; as the largest economy in Africa.

“Today, at this 62nd anniversary. For me it’s personal because I’m an independent child and seeing how we have gone and where we have been as a nation whose past is more glorious than their present. This must end.

“Today, we mark the sixty second anniversary of our independence. Sixty two years ago, the union jack was lowered. And i want also to remember specially Queen Elizabeth the second of blessed memory. May God grant her soul eternal rest.

“Yes! We also celebrate our founding fathers who also fought and some with their blood, to give us a new nation, and which we must all now fight to preserve and to grow to become the largest black nation on earth. That is what it is destined to be; but together we have to build it.

“We celebrate our youth. We celebrate all those who toil every day to make this nation great.

“Watching the parade today and the commanders, our armed forces, our security agents who work day and night to keep us safe. We celebrate the ordinary Nigerian, the poor, all those who believe that a new Nigeria is possible. That’s why we are here to celebrate today.”

The governor regretted that in sixty two years of our existence, Nigeria’s founding fathers may be turning in their graves and recalling what they were able to achieve especially in the first Republic with no oil, just merely few natural resources and agriculture.

He recalled that in the Eastern region- the forebears; Dr. Nnamdi Azikiwes, the M.I Okparas, Akanu Ibiam, all helped to build the fastest growing regional economy in the world with just palm and agriculture produce, saying, “They must be turning in their graves to look back and see where we are today, that inspite of the trillions realized from crude oil, Nigeria is still punching largely below ten percent of its potentials. And that is the sorry sight.”

He called on all patriotic progressives of Nigeria to see the anniversary as a time to unite, adding, “Next year is an election year. Politicians are all over the place now, wanting to get into office. But I think it’s a time for soul searching, for us to rediscover the purpose of public service.

“Time for us to rediscover the essence and why our founding fathers fought for us to be an independent nation. For us to build that black race that will be the greatest black nation on earth. And I call on all patriotic progressives to unite for the next Nigeria because that next Nigeria have all the potentials to become anything we want it to be.”

To Ndi Anambra, Soludo said since coming into office 6months ago that his government has been working and pushing on all fronts, trying to address some of the key foundational issues, to be able to live out the whole essence of its dream and vision as articulated in the Soludo Solution manifesto- the agenda to build a liveable and prosperous smart megacity as Anambra.

“We celebrate those on whose shoulders we stand on today. These six months, we’ve been trying to address the foundational issues related to the five fingers of that agenda- security, law and order, economic transformation, social agenda, governance, environment.

“When we came, there were about fifteen camps all over the places, kidnapping and killings. Today, you yourselves are now bearing the testimony that their architecture is largely degraded. Security is back in Anambra. But for it to continue, it requires all of you.

“Anambra is unique for collective, communal and individual efforts. Today, we lift that spirit of Anambra as we say in our anthem. With your help, we will continue to build Anambra that is free and safe for everybody to come and do business.

“For those who thrive in all kinds of brigandage and impunity. Those days are over. The agberos and the rest. We’ve told you there is no place for that in Anambra. We are offering you opportunities, where we give you some trainings. Going to harass the keke riders and bus drivers as a means of livelihood has no place in the state.

“To those who are law abiding, we have a duty to protect all of you. Our message to you is that the zero point zero percent of them cannot define who we are. The  eight point five million other people must be allowed to enjoy their life and realize their God-given potentials, fully. This is why we are here. And I want to assure you that we will continue day and night, every day of the week to ensure that this place remains safer.

“In six months already, we’ve awarded over 120 kilometer of roads. We are getting on to other means of transportation – bus terminals are in design, designs of our new industrial city, our industrial parks, to get them ready. We are trying to take out the jinx on the automobile industrial parks at Nnewi and co. Our new entertainment and leisure city. We have a full package for you. That’s the agenda. We are just building the foundations. Like a former American President once said: “You just haven’t seen anything yet.”

“On the social agenda, as you know, we are determined to end an era without teachers and without doctors and nurses. We are working on building a human capital that is productive at home and exportable abroad.

“On governance, our motto is to do more with less. In an era where oil is almost on its way out and where the public finances are very lean, prudence is our watchword.

“Every money you put in our hands must be fully and judiciously put to use. But in furtherance to this personal and individual responsibility, everybody must pay their own fair share. Pay your taxes.

Our environment remains the number one existential threat for Anambra. About thirty to forty percent of our land is either engulfed in gully erosion or being threatened by such. Erosion, every day is an emergency for Anambra. And you have seen the one of nature. Every year, we face the flooding along the coastal places.

“Now about three local governments are seriously affected. Thousands of Ndi Anambra are affected and they are now being taken out to IDP camps, costing a fortune to resettle them. The government is doing its own bit, but all of us will have to work together, he stated.

While describing it as personal responsibility even in the area of environment, he called on Individuals to keep the places clean, green, planned and sustainable.

He said that soon government will launch operation clean up all the gutters, desilting all the drainage ways so that flooding will not continue to cause the havoc that it does everywhere.

The governor said his government will work cooperatively with the federal government to ensure that it finds a permanent solution along the coastal lines.

He added, “Let’s begin to build embankments along the banks of these rivers that continually every year destroy livelihoods, Agricultural land and homes.

“With judicious use of resources, we can bring a permanent solution to that so that our brothers along Anambra West, parts of Anambra East, Ogbaru and co, will be able to enjoy twelve months in a year, without having to run away from their homestead. We can if we bind together.

“And for Anambra state, the question every day, as an itinerant people, wherever you may be. We have more than 50 percent of our population living outside of our homeland. Everyday, ask yourself this question; what I have you done to make Anambra safe, liveable and prosperous. If everybody does its own part, this country will rise up to lead the rest of Africa that twenty second century will become the African century.”