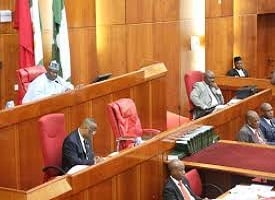 Senate has disclosed that President Muhammadu Buhari will on Friday receive the harmonized version of 2010 Electoral Act ( Amendment Bill ) from the National Assembly .

The former governnor added that  he believes in direct primary because it is about taking democracy to grassroots.

“The National Assembly will transmit the bill to the President this week for assent and we expect that he will sign it into law by the grace of God.”

He added that the amendments were made based on request from Nigerians.

“It amendments were made based on the views and requests of Nigerians. i believe that it will help to guarantee free, fair and credible elections in the country,”Gaya stated

“We are surprised that the machines malfunctioned at the Anambra governorship election because they worked perfectly when INEC demonstrated them for us at the  committee.

“We have agreed to try the machines in other elections coming up in 2022 so as to determine their functionality before the 2023 general elections.

“We still have the Ekiti and Osun elections coming up. However, INEC is already working on the solution so that we would not have problems in 2023.

“I will not agree that it is a case of sabotage because it is an electronic device that could fail but we already have provisions for spare. If a machine  fails, a new one would be brought in.

“It is even good that it happened in the Anambra governorship election. If it had happened at the general elections, it would be a catastrophe.

” Unlike in the past when funds for elections were not released a few weeks to elections, this time, we specifically mentioned that part of the funds meant for the election must be provided a year before the election.

“That is why we have a proposal for partial  release of N100bn  for for the 2023 general elections in the 2022 budget.  We are hoping that we could get further funding before the election.

“The N100bn will allow INEC to order materials that it would need ahead of the elections including machines that could be manufactured here in the country.”