Nasa Artemis rocket launches into space, as humanity begins journey back to the Moon

Most powerful rocket in history blasts off after repeated issues 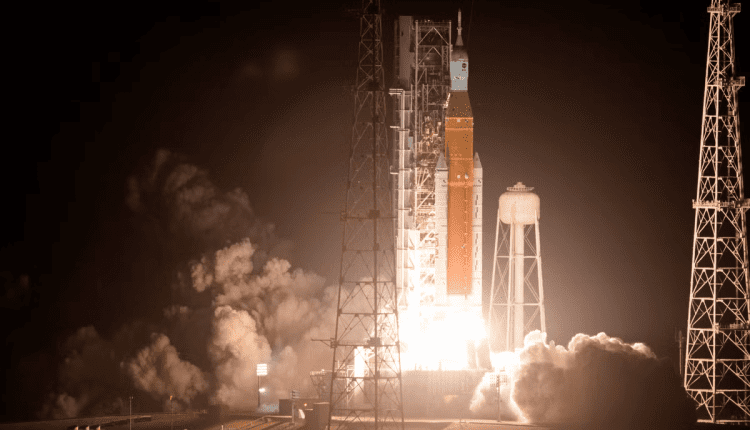 Nasa has successfully launched its Artemis rocket, beginning a journey that the space agency hopes will take it back to the Moon.

The Space Launch System – the most powerful rocket in history – successfully lifted off from Florida, following two aborted launches and months of waiting.

The successful launch begins a 26-day mission that will see the Orion capsule – which will one day carry astronauts back to the lunar surface – as flies around the Moon and then splashes back down onto Earth.

Launch director Charlie Blackwell-Thomson called the launch incredibly special, and told her team that they had earned a place in history. The launch is “the first step in returning our country to the Moon and onto Mars,” she said.

Dubbed Artemis I, the mission marks the first flight of the SLS rocket and the Orion capsule together, built by Boeing Co and Lockheed Martin Corp, respectively, under contract with NASA.

It also signals a major change in direction for NASA’s post-Apollo human spaceflight program after decades focused on low-Earth orbit with space shuttles and the International Space Station.

Named for the ancient Greek goddess of the hunt – and Apollo’s twin sister – Artemis aims to return astronauts to the moon’s surface as early as 2025.

Twelve astronauts walked on the moon during six Apollo missions from 1969 to 1972, the only spaceflights yet to place humans on the lunar surface. But Apollo, born of the Cold War-era U.S.-Soviet space race, was less science-driven than Artemis.

The new moon program has enlisted commercial partners such as Elon Musk’s SpaceX and the space agencies of Europe, Canada and Japan to eventually establish a long-term lunar base as a stepping stone to even more ambitious human voyages to Mars.

The Artemis I countdown climaxed with the rocket’s four main R-25 engines and its twin solid-rocket boosters roaring to life, sending the spacecraft streaking skyward and lighting up the night sky over Florida’s central Atlantic coast.

About 90 minutes after launch, the rocket’s upper stage is designed to loft Orion out of Earth orbit on course for a 25-day flight that will bring it to within 60 miles (97 km) of the lunar surface before sailing 40,000 miles (64,374 km) beyond the moon and back to Earth.

The capsule is expected to splash down on 11 December.