Raheem Sterling revealed last week he is unhappy with his situation at Manchester City and is open to leaving the club; England winger has started only five games for City this season; De Bruyne speaking ahead of return to Belgium to take on Club Brugge in the Champions League on Tuesday 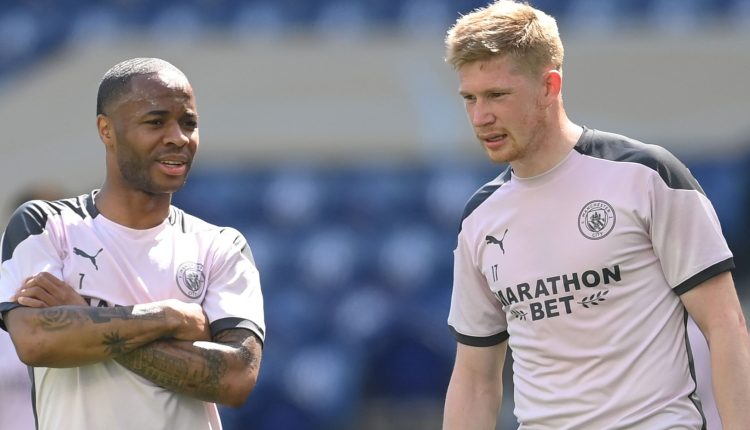 Kevin De Bruyne says he understands why team-mate Raheem Sterling is frustrated with his situation at Manchester City but insists that squad rotation is part of life at a top club.

Sterling admitted last week that he is open to leaving City – and possibly the Premier League – after falling out of favour under Pep Guardiola.

The 26-year-old starred for England during their run to the Euro 2020 final in the summer but has started just five matches this season for City, prompting him to admit that he is unhappy with his current circumstances at the club.

Asked about Sterling’s comments ahead of City’s Champions League clash away to Club Brugge on Tuesday evening, De Bruyne said: “Obviously rotation is important because we are playing four competitions. It’s a tough task sometimes.

“But I understand the frustration because I’m a player and some players need more rhythm to get into it. Maybe Raz is somebody who needs that more. I’m personally a player who needs that also.

“Sometimes it’s tough to play one game, one game not, but obviously it’s the manager who has to make choices. It’s very hard.

“We have 22, 23 internationals who are unbelievable, so whoever you pick, you will be right a lot of the time.

“Whenever the team plays good, there’s not a lot of things you can say as a player. But we also try to help each other – that’s the only thing we can do as players.”

City go into the game against Brugge in third place in Group A – one point behind their opponents – following their defeat by Paris Saint-Germain on matchday two.

Guardiola’s side reached the final last season, where they were beaten by Chelsea, but De Bruyne revealed he has limited memories of the game after sustaining facial fractures in a second-half collision with Blues defender Antonio Rudiger.

“I remember some chances – there were not a lot – but I remember some in the first half, and the goal,” he said. “But after the collision I don’t remember a lot.

“I don’t remember how I got to the hospital or the night itself. I remember going back in the morning to the team hotel, about 10am and still in my Man City kit.

“It’s sport, it happens. It’s not the best thing that ever happened but you get on with it.”

Despite enduring a painful evening in that final, De Bruyne’s efforts for City and Belgium during 2021 were enough to earn him a place on the 30-man shortlist for this season’s male Ballon d’Or award.

But the 30-year-old is firm in who he believes should win the prize, saying: “I think if I have to choose personally, I’m going to look at a two-year period because obviously, we didn’t have one [last year].

“I would choose [Robert] Lewandowski for what he has done in the last two years goalscoring-wise with Bayern [Munich].”