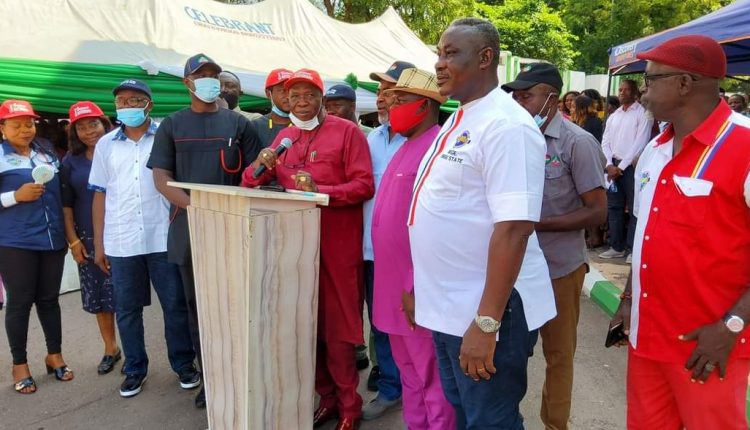 Jubilant members of the Nigeria Union of Local Government Employees, NULGE, in Enugu State led by their National President, Comrade Ambali Olatunji, trooped out in their numbers to the Government House, Enugu, on Thursday, to thank Governor Ifeanyi Ugwuanyi for restoring Plot P/23CA, Independence Layout, Enugu, to NUGLE, after it was discovered that the said land was purportedly revoked without the governor’s approval pursuant to the Land Use Act.

The local government workers, who took to their dance steps, expressed immense gratitude to Gov. Ugwuanyi for wiping out their tears over “our ordeals under the immediate past Commissioner for Lands and Urban Development”, stressing that the governor has “really gotten us out from the state of hopelessness”.

Similarly, the people of Emene Nike Autonomous Community led by the Traditional Ruler, HRH Igwe Felix Ugwu, also paid a Thank-you visit to Gov. Ugwuanyi for equally restoring their land which was purportedly acquired without the knowledge and approval of the governor.

Earlier in his remarks, the new Commissioner for Lands and Urban Development, Nnanyelugo Chidi Aroh disclosed that on assumption of office he was shocked to discover, after thorough investigation, that the purported revocation of the NULGE land was done without the knowledge and approval of the governor pursuant to the Land Use Act.

Speaking further the Commissioner said: “Your Excellency, you will recall that a few weeks ago, the Department of State Service, DSS. knowing how much you have invested in terms of time, efforts and resources to ensure a peaceful Enugu State had alerted you of a crisis that was brewing in the State Ministry of Lands and Urban Development over the purported revocation of Plot P23CA Independence Layout, Enugu belonging to Nigeria Union of Local Government Employees, NULGE.

“Your Excellency, as you were digesting this important report from a trusted partner in the security of the state, the DSS, members of the Enugu State House of Assembly after their investigation further alerted you of this crisis and the injustice that was done.

“Your Excellency, you ordered immediately a comprehensive investigation into the circumstances leading to this very big aberration in the process of your governance.

“After the whole investigation, it was clearly established that you (Ugwuanyi) did not even know neither was your permission and approval sought in line with the requirements of the Land Use Act before the revocation was done.

“When you called for this file on my assumption of office, we did a complete review and we discovered that even the processes of revocation were not even contained in this file which was a deliberate process to ensure that not even the staff of the Ministry of Lands and Urban Development could see this and alert you.

“So it was the fact that you didn’t have knowledge of this that allowed this matter drag to this extent.

“Your Excellency, in your determination to always ensure that justice, due process and the process of governance protect the least people of the state, you directed immediately that we should reverse this purported revocation.”

Speaking on behalf of NULGE, the National President, Comrade Olatunji, who described Gov. Ugwuanyi as “the most labour-friendly governor in Nigeria” and “the ray of hope in the South East”, told the governor that the workers were happy and excited at such rare decision.

Comrade Olatunji recalled that Gov. Ugwuanyi had displayed similar support and solidarity with NULGE during the LG Autonomy rally, pointing out that such disposition was a proof that the governor believes strongly in the struggle and betterment of rural dwellers in particular and Nigeria in general.

The National President went further to appreciate Gov. Ugwuanyi for his courageous spirit in restoring the land to NULGE, stating that some leaders would not take such decision because of pride.

In their separate goodwill messages, the State Chairmen of Nigeria Labour Congress , NLC, and Trade Union Congress of Nigeria, TUC, Comrade Virginus Nwobodo and Comrade Ben Asogwa respectively commended Gov. Ugwuanyi for his prompt intervention on the NULGE land matter and for other labour-friendly programmes in the state.

Thanking Gov. Ugwuanyi for the numerous development projects his administration has executed in Emene community and its environs, the Traditional Ruler, Igwe Ugwu, who revealed how he collapsed after signing the land acquisition documents, said that he was sure that the governor was not aware of the purported acquisition and does not take people’s land by force.

“Your Excellency, remember you called me one night that I should start sleeping. So I started sleeping until last week your new Commissioner for Lands and Urban Development, Barr. Chidi Aroh, called me to come to his office where he told me that the government is reviewing the letter of acquisition.

“The rest is now history. On Tuesday, the Commissioner for Lands and Urban Development called me and gave me a letter of reversion. Gburugburu (Ugwuanyi) we have come to thank you. God will be with you in all that you do. We are grateful,” Igwe Ugwu said.

The two events were witnessed by the Secretary to the Enugu State Government, Prof. Simon Uchenna Ortuanya, the Chief of Staff to the Governor, Rt. Hon. Dr. Festus Uzor, the Deputy Chief of Staff, Prof. Malachy Okwueze and the Commissioner for Labour and Productivity, Hon. Uchechukwu Ogbonna, NULGE National Vice President, South East, Comrade Patrick Igwe, among others.

NLC to Uzodimma: Workers in Imo State won’t let you down

NLC to Uzodimma: Workers in Imo State won’t let you…

Ngige calls on labour officers to shun corruption in…