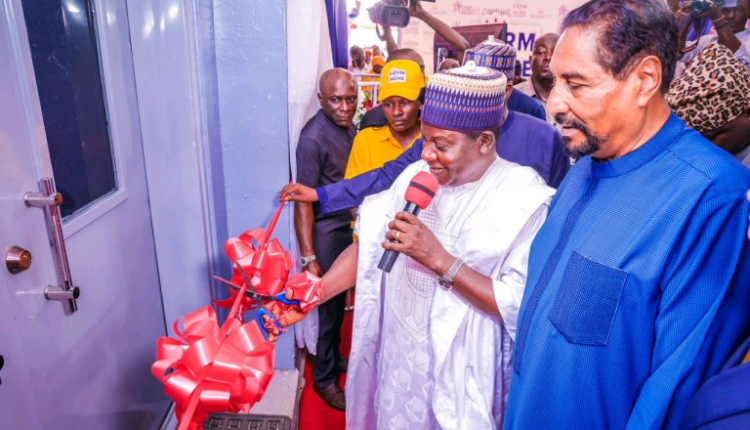 From Daniel Dauda, Jos
Governor Simon Lalong has inaugurated a new production plant for NASCO Foods Company in Jos as he commended the company for its consistent contribution to the economic development of Plateau State and Nigeria at large.
While unveiling the plant on Thursday in Jos, Lalong said NASCO is one of the few companies whose chronicles can be written alongside the history of Plateau State and Nigeria especially because it bears all the hallmarks of endurance, durability, immense potential, and a unique talent for survival.
He commended the Executive Chairman, Management and Staff of NASCO for sustaining the virtues of its founding father,  Late Dr. Ahmed Idris Nasreddin who laid a solid foundation 57 years ago, nurtured the company to growth and prosperity before his demise.
The governor noted that since it began its operations 57 years ago, millions of Nigerians from the post-independence generation to young Nigerians today have all been able to share almost identical experiences from having used the different product categories which NASCO has come to be known for.
According to him, “before Government started to promote self-sufficiency in food production – a policy which encouraged Nigerians to produce what they eat, NASCO’s adoption of the policy of back-ward integration in sourcing maize as its chief input for the production of cornflakes had empowered thousands of farmers on the Plateau and across many locations in central Nigeria. This had directly impacted on the volume and quality of the maize that its suppliers were cultivating. Cumulatively, this process now integrates into the Buhari administration’s drive to develop the agriculture commodity supply chain, for which maize has been recognised as one of the most important commodities. The overall goal of this initiative, of course, is the creation of jobs and wealth for Nigerians”.
The governor acknowledged that this foremost company has not only deepened its presence in Jos, but has endured all the challenges that emerged at various times which led to the exodus of many investors from the State. He said without doubt, this innovation and strategic investment in “state-of-the-art technology” equipment and machinery, will further upgrade the standard of its cornflakes to match the most notable international brands in terms of superior quality.
He said he was a proud man to unveil this brand new production line within his tenure which is a fulfilment of one of the policy thrust of the Rescue Administration that talks about “Sustainable Economic Rebirth”.
Lalong said the State has also attracted more investors who have started businesses particularly within the Small and Medium Enterprises category. This has brought more jobs to Plateau citizens and also boosted the State’s IGR.
“While we commend NASCO for its patriotism and resilience in Plateau, I urge all citizens and indeed other business organisations to continue to be good Ambassadors of Plateau State. We should avoid carelessly de-marketing the State on account of one minor unpleasant incidence.”
Executive Chairman of NASCO Dr. Attia Nasreddin while appreciating the Plateau State and Federal Governments said the company has received tremendous support and encouragement to overcome the challenges over the years leading to growth of the company.
He said the new plant which boasts of state-of-the-art technology will double it production capacity, enhance the working conditions for its staff and also improve environmental sustainability.
Nasreddin said the company will continue to fulfil its corporate social responsibility to Plateau State and also support the efforts of the Government in improving the lives of its citizens particularly farmers who have developed a special relationship with NASCO.
Deputy Speaker House of Representatives Idris Wase represented by Chief John Dafaan; Representatives of Bank of Industry, NAFDAC, MAN, and maize farmers in Plateau State all appreciated the giant strides if the company over the years and impacting lives positively.
Governor Lalong after inaugurating the new plant undertook a tour of the facility worth billions of naira and supported by the Bank of Industry.
Attachments area