Lagos lawmaker gives out 12 mini-buses, freezers, others to empower constituents 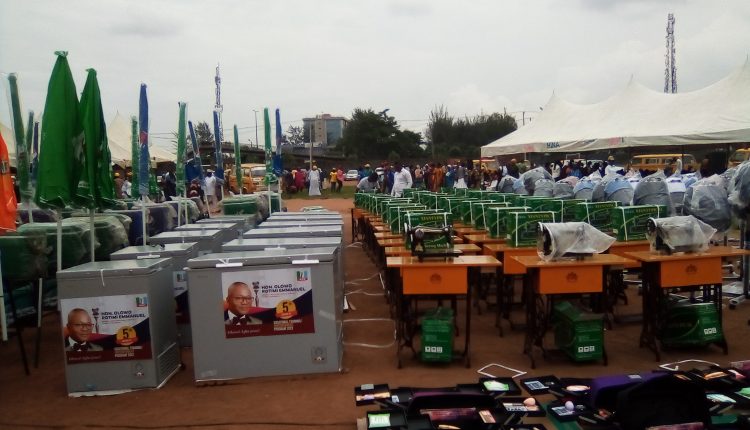 -Ex-Reps endorses him for Shomolu Federal constituency
IBRAHIM QUADRI
A member of the Lagos State House of Assembly, Hon. Rotimi Olowo has declared his intention to represent Shomolu Federal Constituency in the House of Representatives in 2023 under the platform of the All Progressives Congress (APC).
Olowo who is currently serving his fourth term in the State House of Assembly from Shomolu constituency I, believes he will be making more impactful representation at the national level.
As part of his move to give adequate representation, the lawmaker empowered a number of constituents especially the youth after undergoing training.
Some of the items given out by the lawmaker included 10 Mini-Buses, deep freezers, 41 dryers, 19 barbing equipment, 38 cosmetics items, 52 tailoring materials among others.
While welcome the constituent to the 5th empowerment programme which took place at the Baptist Academy, Obanikoro on Wednesday he said he has the requisite experience to move to Abuja in 2023 as a ranking lawmaker of the Lagos Assembly.
The lawmaker told party members, market women and men, youths and residents of the area, who were at the event that he is competent, reliable and efficient to be a member of the House of Representatives.
He recalled that as the Chairman of the House Committee on Works and Infrastructure, several projects undertaken by the state government were supervised by his committee without asking for any pecuniary rewards from the contractors, adding that the projects were there for everyone to see.
Olowo, while appreciating the guests at the event, said in his speech that apart from organising such a formal outing, he has personally supported groups, individuals, youth and the aged, start-up entrepreneurs, petty traders, artisans and market women and men to actualise some of their financial needs through direct financial intervention.
He stressed that he has also done quite a lot in the area of private interventions to people with medical needs ranging from basic surgeries to critical ones.
“These among many others are done with a purposeful intention for the wider prosperity of our people
“Representation, they say is the first assignment of any legislator. This, I have kept to; standing diem, remaining tireless and dogged in making your voices heard at all times.
“I have advocated, engaged, persuaded and lobbied the State Government to influence various developmental projects to our Constituency, which have in no doubt made our dear Somolu an envy of all in the state.
“It is no doubt that my time so far as your representative in the Lagos State House of Assembly has brought great impact and succour to this constituency.
“We have also done our best to ensure many of our capable people are gainfully employed by providing them necessary supports during and after recruitment exercises at different times and stages in the state,” he said.
The lawmaker revealed that he has influenced a lot of people to the state civil service, the Teaching Service, LASTMA, Neighbourhood Watch and other relevant Agencies and Parastatala of the government.
He stressed that in terms lawmaking, he has personally sponsored and jointly sponsored many bills with several motions, “all for the betterment of my Constituency and Lagos State as a whole
“I have participated in various oversight activities at different times towards ensuring Ministries, Departments and Agencies of the state adhere to laid down rules and regulations at ensuring optimal value for every resource committed to them by the state.
“So far, I have served as the Chairman, House Committee on Tourism, Art and  Culture, Chairman, House Committee on Works & Infrastructure, Chairman, House Committee on Budget and Appropriation, Chairman, House Committee on Local Government Administration & Community Affairs and currently Chairman, House Committee on Finance. I have also served and still serving as a member of many other committees,” he said.
A former Representivetives member who had represented Shomolu Federal Constituency, Hon Adeyemi Oluwole endorsed Olowo to represent the constituency, saying “Today, I’m handing over to Olowo to represent Shomolu.”
Oluwole therefore told the audience to give him support, adding “he will have to come up with a legislative agenda because representation at Abuja is different from the State. At the national level, you are meeting different ethnic groups so l must give him my support.”