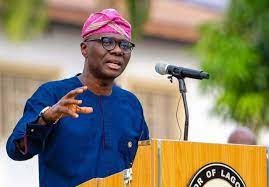 The Lagos State Government has banned the land owners, Onikosi family in Magodo from excavating sands across the Estate.

There had been an alleged indiscriminate mining of wetlands in the area that had continued to put residents under threat in the State.

The government therefore warned that should the family and any of their representatives embark on sand excavation within the Estate’s wetlands, they would be severely sanctioned under the law of Lagos.

The Commissioner for Physical Planning and Urban Development, Dr. Idris Salako, who announced the government decision, described the family’s actions as unwarranted and provocative.

Salako added that the moves by the Onikosi family were contrary to the civic gesture of the State Government, which has displayed absolute trust in the rule of law in the Magodo land saga.

While inspecting damages done to residents’ houses within the Estate, the Commissioner stressed that the family’s actions has affected the foundation of some buildings within Magodo GRA.

Salako disclosed that the Onikosi family activities were truncating the Government’s plans to create Magodo Scheme III and resettle the land owners as directed by the Supreme Court.

According to him, “We were busy making efforts to resettle the Onikosi family in Magodo Scheme III, being created in between Scheme I and II and Omole Estate, the family decided to stoop so low by taking the law into their hands and traumatizing innocent citizens with the unlawful act.

“It is unimaginable that any family in Lagos State, noted for her unrivaled sense of accommodation and conviviality, will go to this length to inflict pain on others, despite reassurances by the Government,” he said.

Meanwhile, Salako who also visited Bolaji Omotoso, a resident of Magodo Scheme II, to see the extent of damage to his property, occasioned by the excavation by Onikosi, commiserated with the resident and advised him to evacuate the building while proper engineering tests would be carried out to ascertain the level of damage.

Through a statement released by the Deputy Director, Public Affairs for the ministry, Mukaila Sanusi, the commissioner said that it was no longer safe to continue occupying the building as it could cave in with any serious rain, adding that the area being excavated had been sealed to arrest the situation.