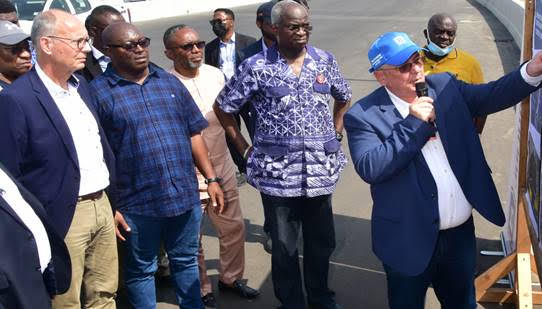 Works minister, Babatunde Fashola has said that work on the ongoing Bodo-Bonny Road project will be completed December 2023 even as he hailed the continued progress on the work saying that, it could only have been done by Nigeria’s foremost engineering construction company, Julius Berger Nigeria Plc.

Fashola spoke at the project inspection tour during the week saying, this project is going to open up this community, and will be completed December next year, Buhari in office or not. There is no fear about that and about the funding and mo fear about the ability and competence of Julius Berger to deliver on the project and in superb quality.

Stressing that funding for the project comes from the federal government’s Tax Credit Scheme into which both the NLNG and other big companies like Dangote and NNPC are investing, the minister continued, we are in Bodo trying to connect to Bonny Island. Contrary to what some people may say, the N200billion invested in this BBR project is nothing compared to its long term significance. This is my fourth time here . From the first time when I visited to really understand the project at hand, it was alarming that within one state, people could not connect with one another. They were being inhibited. But the Peace Committee set up for the project embraced all the communities in this project area. Thank God, they are all working together now.

Project Manager for the BBR, Engr Thomas Haug on his part did not mince words in reassuring all stakeholders that work was progressing and would be delivered on schedule.

He said, the scope of work for the Bodo-Bonny  Road includes the constrcution of a 38km long road through the low lying swampy area including three major bridges of 500m, 780m and 12oom in lenght as well as 9mini bridges, a pipeline crossing bridge and multiple pipeline crossings and culverts.

Engr Haug added that after the completion of the Bodo-Bonny Road, it will not only serve as a connection between Bonny and the mainland, it will as well connect fishing settlements and villages to the road network which could only be reached by boat hitherto; declaring that, we are sure that this road will have a big impact on this region.

Accompanied by the Regional Project Coordinator, Mr. Sam Ngbor, the Project Manager led the minister and his entourage to physically inspect the entire lenght of the project  from Bodo to the fringes of Bonny where the last mini bridge across the Nanabie Creek is being constructed.