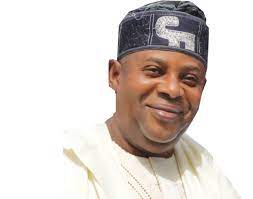 The emergence of Rt. Hon. James Abiodun Faleke, Chairman of the House of Representatives Committee on Finance, representing Ikeja Federal Constituency of Lagos state, as the Secretary, Tinubu/Shettima Presidential Campaign Council speaks volumes of the character and personality of the lawmaker who, by the appointment, is saddled with the responsibility of heading the administrative unit of the 422-member body with President Muhammadu Buhari as chairman.

A humble, honest and diligent alumnus of the Asiwaju Bola Ahmed Tinubu, the All Progressives Congress, APC, presidential candidate’s reputable ‘Leadership Training Institute’, Faleke had shot into national limelight in 2015 when he demanded for justice and fairness in the historic Kogi state governorship election following the sudden death of the party’s flag bearer Prince Abubakar Audu hours before the final collation of results of the contest in which he was comfortably coasting to victory.

The lawmaker as the running mate to his then principal felt that justice and decency should prevail and the Independent National Electoral Commission, INEC should declare him the winner of the exercise since it was a joint ticket. But unfortunately, that wasn’t going to be as the umpire declared the contest inconclusive on the ground that the number of cancelled ballots was higher than the difference between the figure polled by APC and his PDP counterpart Idris Wada, who was the incumbent governor.

Rather than defend its own, the party opted to pick Yahaya Bello who was runner up to Prince Audu in a new primary and directed Faleke to bow to the new candidate as running mate in the supplementary election that was won eventually by the APC, which the Kogi born legislator promptly rejected. He didn’t stop there but headed for the election petition tribunal to challenge the legality of the party’s decision to make him a deputy to Yahaya Bello who  was not originally on the ballot on 21 November, 2015 when major votes in the election were cast.

According to him, “I will not disappoint Prince Abubakar Audu. I, James Abiodun Faleke, will not be there for the swearing-in if we don’t finish the case before the January 27, 2016. Nobody consulted me before making me a deputy to Bello. Bello too did not consult me. I have made my position known to the party leadership on this. I am not ready to betray and disappoint Prince Abubakar Audu.”

As a man of integrity and in keeping to this vow also, Faleke did not present himself for inauguration as deputy to Yahaya Bello thereafter while the former proceeded to hand pick Simon Achuba, who was later impeached in October 2019. That powerful statement and insistence that the rule of law prevailed which saw the petition getting to the apex Supreme Court reportedly won the hearts of many prominent leaders of the APC including his mentor and two time former governor of Lagos state, Asiwaju Tinubu.

Truly, for standing up for justice and in dogged defence of the rule of law in a novel petition, according to a political analyst who did not want to be named, did not only enriched the nation’s jurisprudence, since there was no such precedent before it but clearly portrayed the true character of the politician as a trustworthy and great leader.

“The fact is: Faleke rather than jump at the carrot dangled at him by some hawks in the party, insisted on justice and fairness even at grave threat to his budding political career at the time but now have the last laugh though he lost the petition at the apex court. It simply showed that he possesses the qualities of some of the world’s most successful political leaders such as honesty, compassion, integrity, confidence and flexibility. He belongs to category of a great leader that the  former First Lady Rosalynn Carter, of the United States describes: “as one who takes people where they don’t necessarily want to go, but ought to be,” he revealed.

While vouching for the appointee’s moral and ethical standards as well as honesty, sense of purpose and uprightness, the analyst further pointed out that the secretary can be trusted and would surely deliver on the sensitive and challenging assignment of serving as the administrative compass of the Presidential Campaign Council expected to sell the party’s manifesto to the nooks and crannies of the country in order to guarantee victory for the Tinubu/Shettima ticket come February 25th next year.

Born on 25 December 1959 in Ekinrin Adde in Ijumu Local Government Area of Kogi state, Faleke had his early education in Ijumu and is an old student of Abdulazeez Atta Memorial College, Ijumu while in 1986, he completed  a Higher National Diploma (HND) in Purchasing and Supply Management with an exemplary award of the best student of his class with Upper Credit from Kaduna Polytechnic. Besides, he holds master’s degree (MBA) in Business Administration majoring in  management from Imo State University, Owerri in 2003 and a Fellow of Chartered Institute of Purchasing Supply (CIPS), London, as well as Fellow, Institute of Public Administration (IPA).

During his National Youth Service in 1986,  he was Purchasing Expediter at the National Orthopaedic Hospital, Lagos and worked in several management positions in logistics- procurement, clearing and forwarding, warehousing, distribution and construction upon his completion of service.

For instance, he had served as Material Manager at Kayo Foods Limited, Ilupeju, Lagos before moving to Tate Industries PLC as Purchasing, Clearing, Distribution and Commercial Manager;  Purchasing Manager at Air Liquid PLC, and Aluminium Manufacturing Company of Nigeria (ALUMCO) PLC before ending his logistics and management career with Crown Agents Ltd as Commercial Manager in 2003.

However Faleke political career started in 2003 with his appointment as pioneer Executive Secretary of Ojudu Local Council Development Area (LCDA) of Lagos State by then Governor Bola Tinubu where he served in interim capacity between November 2003 and April 2004, when he was elected substantive chairman of the local government, a position he held for two terms ending in 2011.

Similarly, sometimes in 2006, his peers noticed the leadership traits in the budding legislator when he won a vote to become Chairman of Conference 57, (the association of Local Government Chairmen) in Lagos State and held that position until 2011, when his tenure as Ojodu LCDA boss ended. During the period too, he was given sensitive assignments on the Lagos State Electoral Reform Committee and the Governor’s Advisory Committee of Lagos State, which is the party’s highest organ in the state.

His foray into national politics began in 2011 when he was elected to the House of Representatives to represent Ikeja Federal Constituency of Lagos state where he his serving a third term and renowned for his brilliant and robust contributions to debates on the floor of the Green Chamber. He is a former chairman of the House Committee on Anti-Corruption, National Ethics and Values, and member of House Committees on Public Procurement, MDGs, Interior, Public Accounts, Science and Technology, and the House Committee on the Petroleum Subsidy Probe.

Notable legislations sponsored by the him include  the NYSC Act Amendment Bill, which proposed life insurance coverage for NYSC members, a bill prohibiting the sale and use of military uniforms because of the attendant security risks as well as a motion on the need to shut over 1,400 illegal border routes to curb insurgency as part of Nigeria’s security architecture to decisively confront the worsening insecurity in the land.

Faleke’s effective leadership traits have aptly been captured in his multiple skills, talents and as someone who knows “when to lead, when to follow, and when to get out of the way” a phrase attributed to the American revolutionary Thomas Paine. In similar vein, the politician according to the analyst and one of his constituents, has the capacity to also “create a shared vision for the future and viable strategic plans for the present; negotiate ways  to achieve what is needed while also listening to what is wanted”, as some of the qualities that he will bring to bear in his new assignment.

Described as political leader par excellence who is both confident in himself and in his innate ability to lead, the secretary is set not only to inspire other members of the Campaign Council to a successful, focused  and hitch-free electioneering campaigns but jointly deliver an emphatic victory to Asiwaju Tinubu and Senator Kashim Shettima during the presidential poll scheduled for February 25 next year.

How to go far in Life

How to go far in Life